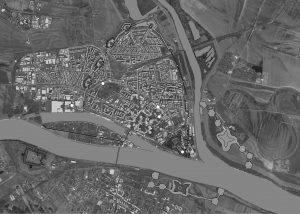 If we understand cultural heritage as a sum of works of art or artefacts which are the result of the work and effort of previous generations, then it encompasses not only the evidence of the historical memory of a territory that has been inhabited for thousands of years but it is also the potential for further development. The town of Komárno and its past are associated with the fortress, the port and the shipyard. The Hungarian-Slovak twin towns Komárno-Komárom were originally one town that was divided after the WWI. The older part of the town is located on the Slovak bank of the Danube river. First, the castle of Komárno was built in this part of the town and gradually it was transformed into a large fortress. This fortification system was part of one of the biggest and most modern fortresses in the Austrian-Hungarian monarchy. Nowadays, the old shipyard, the port and the new shipyard are considered to be important industrial heritage of the town that encouraged the development of industry in the town and in the whole region. The objective of the international project DANUrB is to reveal unused or hidden cultural heritage and to spatially organize the resources in relation to the Danube. These resources are to be interconnected to establish viable cooperation and thematic products for tourism industry in accordance with the spatial cultural strategy.