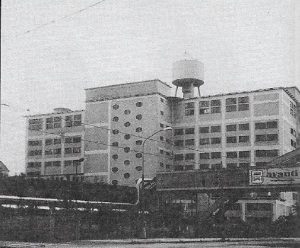 Chemical plant Dynamit Nobel were founded in Bratislava as late as 1873. After 1945, after the renewal of destroyed parts, they started with preparation of construction of a new plant. Director of that time Ing. Ríša, who was a previous director in Baťa’s factory in Batizovce, asked V. Karfík to design it. He started but then after a conflict with the national administrator of Baťa’s concern, he left the studio in Zlín and in 1946 moved to Bratislava. Karfík, who continued in his Baťa’s practice, designed in Bratislava, in Vajnorská Street a modern factory which is an example that also industrial architecture with complex chemical operation can be designed as a coherent unit of a good architectural standard.