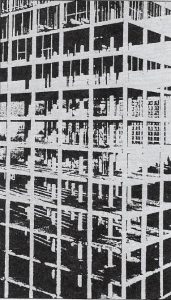 The author tackles the phenomenon of “Architecture of Zlín”, which became a remarkable phenomenon not only of the Czech-Slovak but also of the world interwar period architecture. In the period of developing funcionalism, in the period of rise of several outstanding architectural works that mostly were the solo architectonic monuments, the architecture of Zlín came with the elements of standardisation and unification, with the type and repeated design that became its characteristic features. It grew organically from technology of industrial architecture, its function and operation. The basic element of the unified architectonic expression and technical solution became the unified module of construction 6,15×6,15m. Construction standard was joint with the utility standard. The result was maximum flexibility and variability.