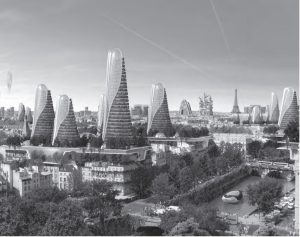 The connection of the cinema and architecture is certainly not new, neither in the form of mutual interdisciplinary cooperation nor as an object of theoretical research. What may seem new or very little significant is the attention paid to the sci-fi cinema in architectural theory.

Architects often toy with the visions of ideal cities or the future cities. So the architectural theory is interwoven with various imaginary cities, which have more or less been documented. In this paper, the attention is paid to city visions, the city visions of the sci-fi cinema.

The intention is to bring the sci-fi city visions closer to the attention of specialists and the public, and to defend film media as one of the new forms used for the presentation of current futuristic visions. The paper offers a basic overview of the publications which deal with issues of sci-fi city visions. Three most general approaches are introduced to the research of sci-fi city visions and deal with the phenomenon of e-topia. The contribution is part of larger research of dissertation on the City in the film – vision, utopia, futurism which aims to promote the argumentation of the relevancy of the sci-fi city visions in films and their position in architectural theory. The research is conducted as a poststructuralist debate with the interdisciplinary background of architecture, urbanism, cinematography, philosophy and sociology.