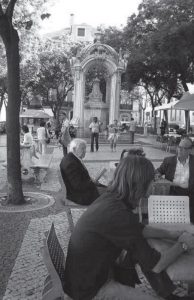 Vivid and bustling city preconditions its further development and is a foundation of a sound urban life. European cities will dominate among the world settlements, from the point of view of a complex urban quality and new urban infrastructure, if they retain the balance of urban factors within the human scale as well in an urban continuous development and a new vitality. Urban vitality should complement the city as well as to be a bonus for local inhabitants and not only in the social sense, but also in the area of a community feel fostering and of integrity with the town they live in. A friendly atmosphere in the town creates relationships among people on the local and regional level; it also forms attractiveness of a settlement and boosts town’s vitality. The vividness of public spaces, especially the squares, is the main magnet for vitality and also for visitors to the town. A precondition for this is a return to a place and its identification, and a return to human scale. Urban vitality – vividness of a city, vitality of the centre, a cultural and social culmination are necessary parameters in the centres of cities. City centre vitality is based on the following: focus on culture, attractiveness, pedestrian movement and human scale; as well as on movement of cyclists, functional variety for multi-generation urban activities, on a participation of inhabitants on a city’s quality improvement, on a varied selection of relaxes activities, artistic and technical activities, etc. To preserve and develop the city’s vitality and its public places is only possible by a layering and a synthesis of the city’s quality in cooperation with its users: inhabitants and visitors, and their active approach to public activities of the town and its social control over the environment of the most significant city structures.