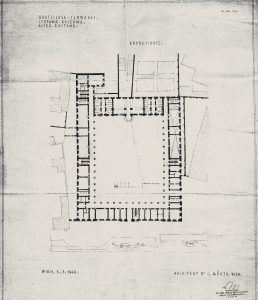 The city of Bratislava has always had a significant military importance due to its strategic location. The introduction of compulsory military service in 19th century made it an important garrison town, too. Apart from building headquarters, schools, hospitals and other military constructions, army focused on construction of barracks, i.e. special military buildings used by soldiers for training and accommodation. They were initially built as individual two or three-storey buildings which have been later transformed into spacious campuses with several volumes divided according to their functions. Depending on the size and specialization of military units, Bratislava had several types of campuses with different locations. In the last decades before the World War I, along with increased urbanization and the policy of European powers, army was trying to build as many barracks as possible and soldiers were forming almost seven percent of the total city population. Only the knowledge of values and development of barracks’ architecture allow us to understand their potential and importance in the future city development.