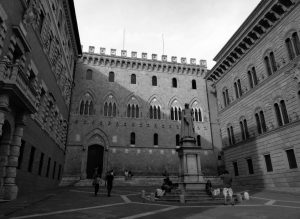 Architects often encounter issues related to placement of a structure. The placement is not always adequate, does not consider local characteristics sufficiently, and often reflects only the aim of the investor. The inconsistency with urban environment is then obvious, as the basic urban principles are not followed. The ground plan of the construction is often not harmonised with its functionality, it is over-sized in relation to the urban environment. Several questions arise in this situation: Is the designed architecture in harmony with the city character specified in legal urban documents? Does the architect of the given construction have the right to controvert the urbanity of the area and the land use plan?

For this reason, currently the issue of granting the city status to small urban appears to be important.  Developmental activities would have to be carried out in compliance with the inner-city structure and the existing multi-functional and poly-functional areas. The ever increasing gap between the theoretical solutions and principals for the logical urban hierarchy of a city and the current developmental reality could start to be less surprising.

The article documents the current status of problematic cities and communities, their existing or missing typical urban structures. Is it necessary, based on the real examples, to show the current state and to indicate the need for a change. Professional criteria for urban hierarchy, based on the historic and demographic development should be stressed. Based on the analysis, it will be possible to state important urban principles that have to be followed to preserve the character of a city. The article will indicate the criteria for granting the city status to communities in the Slovak Republic.

In the Slovak Republic, city is a status of a community received by a community upon their request and after meeting the criteria based on the law No. 369/1990 of the Slovak Republic. The amendment (1.11) to this law in its fourth part, in §22, states five conditions for receiving a city status. Community can be granted a city status from the 1st of January of the given year by fulfilling the following conditions:

– it is industrial, administrative and cultural centre or a centre of tourism or a spa area,

– it provides services for inhabitants of the neighbouring areas,

– it provides transportation services connected to the neighbouring areas,

– it has built-up areas,

The city status can be granted even if the condition of number of inhabitants is not fulfilled. It is known from the history that there was a wider categorization used in naming the inhabited areas (as for example spa city, smaller cities…). Today there are only two categories: city and rural areas. It seems that reviewing the city status today is simplified, superficial and problematic. When reviewing the criteria and conditions based on the law upon which a city status is granted, there is a question: why is there no interpretation of these conditions and criteria and why is there no up to date urban view that would specify the city granting status. Change or at least amendment to the law prepared by expert urban planners becomes inevitable and would mean a change in the number of cities which exist today. One condition for a community that seeks to be granted a city status is an approved land use plan. There are also other relevant aspects that should be followed: structural aspects of buildings, specific interest areas of the city, specific character of the build-up areas, etc.

The formulation which claims that a community with has less then 5000 inhabitants can be granted a city status is speculative. The exception should be granted only to cities with ‘city history’ or special ‘genius loci’. Communities with a city status should be urban areas with clear city structure – inner city and central city area. Granting a city status based only on political and administrative point of view may have negative results not only from the professional urban point of view, but also from the sociological, political and economical points of view. The paradox is that we are returning to the beginning. The core the problem for a community is to prove the city character. For the process of evaluating the criteria, it is important, that city representatives are present at the process of granting the status. The current practice has resulted in granting the city status to communities which do not comply with the basic criteria of a city.

A city has to be an urban structure of industrial, administrative and cultural centre, it has to provide services and jobs for the inhabitants of the neighbouring areas, it has to have connection with the neighbouring areas, and it has to fulfil complex demands of the inhabitants. The basis for the request for granting a city status should not be only an approved city area with promise for the future that does not solve the structural points of view and its structure will not comply with functional structure. That is why the city seeking for a city status should thoroughly document its present ‘evaluation’ and ‘research’ of the area, and also document its perspective in the form of the ‘strategy of the development’ and ‘plan of the industrial development of the city’. It means that it should not be only a promise for future development but documented reality of the existing situation. The process of granting the city status should be based on updated evaluation of cities from the point of view of an architect and urban planner. The aim should be to evaluate the existing structural status of a community in a way that will enable to formulate new urban criteria for granting the city status.