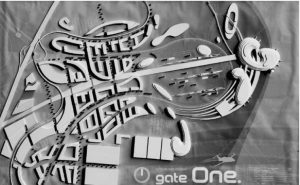 With respect to historical foundation of the city and its natural conditions, the eastern area around the city appeared to be the most natural and respecting the agglomeration tendencies as well. This direction of the city development was realized already in the period after the city development got over the rampart. The development continued even in the period of industrial revolution. At the beginning, the development continued by slow addition of building construction. Then the development gradually accelerated and so did the agglomeration relations. This was reflected in extension of the city functions into the broader region. Today, this development is primarily marked by so called “developers´ urbanism“ which takes advantage of existing legislative drawbacks and which is also marked by absenting conceptual preparation. Interestingly, it was right this direction of the potential city development which was the topic of numerous debates and considerations by architects and urban planners. The article presents an outline of the debates and the essay by scholars – urban planners from the former Chair of Urban Planning directed by Professor Svetlík is in this way presented for the first time. The authors stressed in it the need of landscape and urban planning solutions for the region. In the eastern direction of the city development are also included “land use seals” that prevent a compact land use development. Apart from the industrialised areas and production services on the outskirts of the developed city area, it is the airport area, which offers large urban planning potential. The function of this area is to a great extent dependent on commercial parameters and some foreign examples prove that the retreat situation can emerge relatively easily. Treatise presented on this topic can contribute to formulate such scenarios that seem to be unreal today.