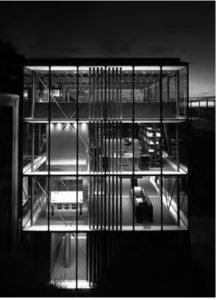 The article deals with the term of transparency in architecture, which is related with start of modernism in architecture at turn of 19-tieth and 20-tieth century. From the beginning of 20-tieth century to nowadays transparency is the term of ambiguous interpretations. Transparency in modern architecture is connected with the search of glass transparency, which enables transparent objects to overlap each other and perceive various spatial positions simultaneously. Transparency is also related with use of initial curtain walls on skeleton buildings and new conception of space, spatial depth and creation of continuous space by tools of architecture. In the 1954 Colin Rowe and Robert Slutzky wrote their influential essay Transparency: Literal and Phenomenal. In the essay they proposed an explanation of literal and phenomenal transparency, which has been later connected with division of modernism into two directions. At the end of 20-tieth century the term transparency is connected with high performance glazed structures, where the proportion of structural elements is minimized. In last decade the new term “Engineered transparency” means the application of glass with new advanced characteristics in intelligent building skins as result of using computer technology in design.