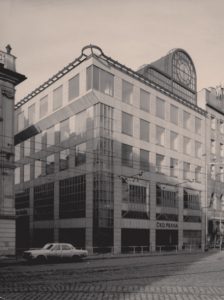 The thick line which in 1989 definitively divided our democratic present from the forty years of socialist period caused that the early post-revolutionary period was full of idealism and hopes for better future. However, the inconsistent settlement with the past resulted in a general refusal of any allusion of the former regime and impeded a detached look for a long time.

Architecture, as an inseparable part of the cultural heritage suffers from the same prejudice and stereotypes by which we got used to judge all remains of the forty socialist years. The post-war buildings have been regarded through the prism of the political regime of that time. Their popularity is still growing very slowly not only among the general public, but also among experts. In Prague there are only ten buildings from the period after 1950 protected as a cultural heritage. Such a small amount cannot fully represent the evolution of Czech architecture of the 2nd half of the 20th century. Which factors impede a complex evaluation of Czech post-war architecture and its preservation? What are the particularities of this architecture and of its potential preservation?

Today’s approach to post-war architecture is determined by several different aspects such as usage of specific building materials accessible on the limited socialist market, which are difficult to maintain or reconstruct. The post-war constructions also face different energetic and hygienic demands, resulting from different laws and mainly from the political misinterpretation.