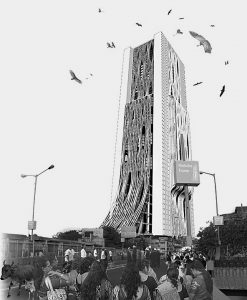 What kinds of spaces, objects and shapes can represent cemeteries? Futuristic cemetery designs, and visions of funerary architecture of the future, express an entirely new approach to this topic. In comparison with the present day cemeteries, they explore new possibilities of working with space and material, intensify the usage of urban areas and emphasize the overall architectonic expression. They provide an answer to the fundamental problems faced by “traditional” cemeteries today. The authors of futuristic visions experiment not only with scale, volume, material and height, but also with new technologies and materials. This new direction taken up by the funerary architecture, perceives cemeteries as sophisticated architectonic structures generating space and as comfortable, specific and unique environments: places of innovation bringing developmental impulses. The presented futuristic cemetery designs, and visions of funerary architecture of the future, are characterized by innovative approaches which can be viewed as cultural-architectonic, functional-operational, mass-space and construction-material experiments.

Vertical cemeteries occupy a minimum of built-up area and so use the available space effectively. The main advantage is their capacity to accommodate numerous graves and urn niches and their construction is economically convenient. Since they do not take up too much surface area, they can be placed in central urban zones and thus be easily accessible to city residents. Vertical cemeteries have the potential to fit together with the skylines of many metropolises which are often dominated by high-rise buildings. The negative features comprise general sensitivity to safety risks such as fires, earthquakes or other natural calamities, and challenges in energy efficiency, typical for high-rise structures. As an example of a vertical cemetery, we present “The Last House” futuristic design by a Korean architect Kim Chan Joong.

Underground cemeteries make use of free space below the surface level and as such are—in a way—a “negation” of vertical cemeteries. Instead of extending skywards, they are downward-oriented and can often be connected with already existing underground places. An obvious advantage is that they save space. They can extend over tens or hundreds of meters underground and be oriented either horizontally or vertically. Another advantage is that they fit into the urban environment and do not disrupt the city skyline. Susceptibility to some safety risks, such as fires, is one of the drawbacks; however, a major issue is providing optimal ventilation and lighting. As an example of an underground cemetery, we present the “Metro Pére Lachaise” futuristic concept, created by architecture student Zaiga Padoms.

Cemeteries floating on water solve the problem of land scarcity by using water surfaces. Nowadays many metropolises are located along the sea coast or on a major river running through the city. Among the pros of cemeteries floating on water we can count attractive nature settings on the water and at the same time in the city, mobility (the cemetery can be anchored in various docks along the coastline or by the riverside and hence be easily accessible to city residents and offer a panoramic view on the city). Their cons are possible safety risks such as fires, earthquakes, tsunami waves and the like. As an example of a cemetery floating on water, we present the futuristic “Columbarium at Sea” designed by architect Tin Shin But.

Green cemeteries create new vegetated areas in already built-up locations. They are a part of the cities’ regeneration, contributing to biodiversity without expanding the city limits. They are characterized by using natural components and ecological technologies in their operation. Green cemeteries improve the quality of city areas by enhancing biodiversity and the plants in the cemetery and its surroundings help regulate dustiness, heat/temperature and provide for shading. On the other hand, as a disadvantage, ecological materials usually require a larger initial investment, also needed for running green technologies. To give an example of a green cemetery, we present the “Moksha Tower”, a futuristic design created by architects Fu Yalin and Lin Ihsuan.

Current trends such as a steep population growth and a scarcity of unbuilt zones in modern metropolises have also impact on funerary architecture: this offers room for a wide range of creative concepts and ideal conditions for creative enterprises. Authors of futuristic cemetery designs and visions for the future, address these trends using various approaches which have the potential to contribute to the innovation in funerary architecture, now facing various challenges. Futuristic designs are the result of searching new options and indicate possible directions in the future development of cemeteries. They show that taking a different perspective on funerary architecture can bring new solutions.

Projects presented in our article outline the complexity of problems related to funerary architecture and present various suggested solutions. These designs can be inspiring for architecture students and architects and stand for actual development trends in this field of architecture, which has so far received little publication coverage in the Slovak language.