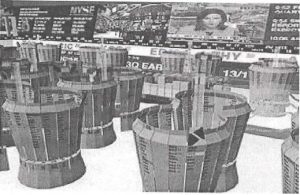 Architecture, whether physical or virtual, is the expression of a society realized as a meaningful space. Physical and virtual architecture have their own constraints and context, yet they both use architectural organization as a way to order forms and spaces in the environment. Both strive to create a meaningful place by defining space. The lack of physics, of time and space in the virtul realm requires special attention and expression of its architecture.
Architecture can be described as a concept or idea that has both physical and virtual expression. Physical architecture is the embodiment and expression of societal values in physical form. It is that which is traditionally studied in schools of architecture and for which designers become licesed professionals. Virtual architecture embodies and expresses values of society in electronic form, with polygons, vectors, and texture maps. Lacking physicality, it does not exist on a genius locus as traditionally understood. However, it is accessible via computer and human-interface technology anywhere.