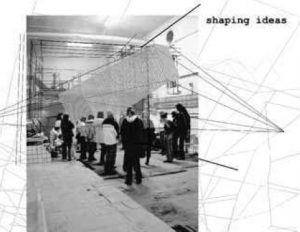 The analysis of our activities until now gives us the surprising pleasure. The students and also pedagogues show a quite big interest in the ideas of the project. (It’s funny that more from abroad than at home.) The opening event we made on the ground of FA STU was a happenning „Let give the heads together“. It was realised in very inspireted space of old empty boiling room. We were trying to explicate and then demonstrate the main principles of our project by the short etudes of semestrial works of the students of pupetry, in which we are dealing with the possibilities of misanscene, moving, (gesture) in space, value of nonverbal communication, space context of interhuman relationships, the interaction of music, sound, rythm, a degree of emotional attack on audience, e.g. – connections with various art and scientific disciplines.

An intergrating part of the happening was the exhibition of the scenographical works of prof. Ciller’s students, videopresentations of alternative virtual objects modeling in real space and projections of works of students of architecture and design. The second activity was a visit at the University of Luton. In several lectures we explained the aims and perspectives of our project. We realised a unique connection between Luton and Bratislava. Not in a sense of technique (normal ISDN lines), but in a sence of dialogue between students in Luton and Bratislava which took part simultaneously „here and now“ playing the same play together. Geographical distance played no role. It was not a common videoconference or e-learning. We created a new quality space of communication. The feedback of participants was extraordinaly remarkable. The ideas of project we have presented also at the Slovak Ambassy in the UK, at the meeting with the President of R.I.B.A, at the Slovak radio BBC, in MLDG architecture agency, and at several interviews for Slovak press and radio, etc.