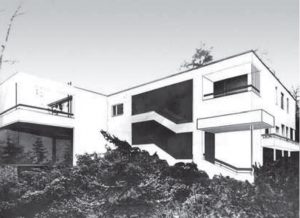 The architecture of diplomacy – an embassy is an environment where citizens of a foreign state can meet another country, another state for the first time. They experience different culture and identity, different civilization level and character. They learn about the conduct and manners and mentality of people from another country. The architecture of diplomacy, the embassies in the context of history of Slovakia, is less explored building typology, development of which dates back to the constitution of Czechoslovakia in 1918. The aim of this essay is to summarize and bring an overview of the selection of embassies, built to the present time, in the context of historical development of Slovakia pursuing the styles of particular political periods. Furthermore, we will analyze the functionality and artistic rendition, the setting in the urban zone, the relationship between concept and context in the environment, etc. We will also look at meaning of the architecture of diplomacy and compare the creation and contribution of Czech and Slovak authors, the influence of political systems and their instruments on creation.

The efforts of authors to achieve the functionality and artistic rendition and accomplishment of the relationship between concept and context in the environment were represented at the high level mainly in the period of renaissance in the 1960s and 1970s. But in other decades the architecture of this type of buildings was also representative. At present the embassies of Slovakia also do not fall behind the current trends in the world architecture. However, it is a pity that their current creation and reconstruction is largely limited because of financial resources of the state. In projection of the embassy the task of the architect is to influence the perception of our country positively by foreigner nationals through architecture representing the state. Architects fill the local program, with its specific requirements for operation; logistics and security, with their special authorial approach and opinion as well as their creed.