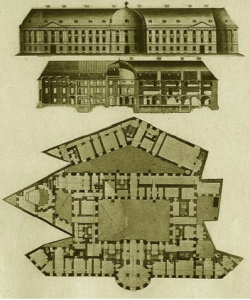 The history of 19th century architecture in Slovakia is rich not only in the varieties of style and typology, but in the wide range of significant strong personalities in the field of architecture – notable architects, developers and builders. The four generations of builders, architects and developers which constituted the Feigler family played a unique role in the architectural evolution of Bratislava. In particular, the work of the father and the eldest son, Ignatz senior and Ignatz junior, refl ects all the significant examples of pluralist historic revival styles of architecture in the 19th century – from Classicism, Romanticism, Rundbogentstil (Round-arch style) and Eclecticism up to the Modernist architecture of the 20th century. The two Ignatzs – father and son – designed many similar types of structures: residential buildings, sacral architecture, and also transport infrastructure projects. They had compatible working philosophies and principles and a common complex approach to making business, which brought them success, social recognition and prosperity to their family business. Many of their works, such as a public hospital, St. Ladislav’s Church, the synagogue on Zámocká street, the mourning chapels at Ondrejský Cemetery and the Cemetery near Kozia brána, rental apartment buildings, the Palugy palace, the horse and steam train railway station, form an inherent part of the architectural image of Bratislava. The high quality of their layouts, progressive construction and the typical Feigler design of facades, have imprinted on our city its characteristic identity.