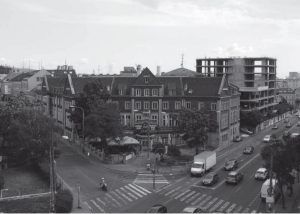 The YMCA building is a former seat of the international youth association YMCA in Czechoslovakia (The Yong Men’s Christian Association) and a heritage site since 2005. The outstanding architecture of this building, its interesting and rich past together with intensive utilization and unclear ownership question its future. The building has been managed since 2008 by the Intenda Association, which presented its interest in bringing the building to prosperity and utilisation for young people. At the occasion of the 90th anniversary of its founding in 2013 the Intenda Association initiated a public competition for preparing an architectural study of its reconstruction and revitalization. The competition pointed out the need of a historical architectural research. Its results have been presented in this article.

The construction of the YMCA building for the railway employees started in 1920 and the building was put in usage at the end of 1923. It was designed by the Moravian architect Alois Balán (1891-1960). In the preparation process participated consultants from the USA-YMCA that also  funded the major part of the project. Balkan’s design is based on a palace type architecture in rondo-cubistic and neoclassical style with an irregular U-shaped ground plan, a symmetric three-wing layout, with an architecturally significant front wing and hierarchically arranged height of individual levels. Balán modernized the traditional character of the exterior copying historic styles with face brickwork, often used in German and Dutch architecture of that time.

The YMCA building has been for more than 90 years a specific phenomenon in public life of Bratislava, not only thanks to its significant architecture forming the ambience of this part of the capital city. It is historically important as a first YMCA building in continental Europe and it is an important symbol as a seat of the Christian association for young men in Czechoslovakia promoting the US- culture and civilisation in Central Europe. Its main contribution belongs to YMCA activities that supported development of Slovak culture, sport (e.g. introducing basketball, volleyball and rugby in Slovakia), charity and social work, Christian and civil activism and education. There are still nowadays many public activities taking place in and around the building.

The worn building requires a complex renovation including a necessary modernisation of the old technical infrastructure. The current co-existence of several diverse tenants runs well and is a positive aspect. In order to preserve the building, it is essential to regulate the uncontrolled and chaotic interference to the structure. For this purpose, a strategy of utilisation of the building has been elaborated that will respect the public principle and model of sustainability for wider cooperation of various institutions.