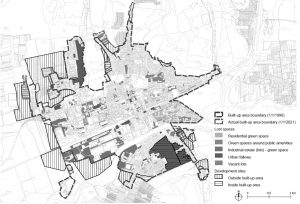 Nowadays, the biggest challenge of urban planners is coping with the climate change and applying the principles of sustainability in urban planning, such as compact city concept and inner urban development. Since 1989, Slovak towns and cities have undergone significant expansion across built-up area boundaries, at the expense of agricultural land. New development areas can be characterized by low-density and high demands on transport and technical infrastructure. As a result, even smaller towns now have disrupted urban fabric with gaps that need to be identified and filled in. Can intensification within build-up areas be a better alternative than the current urban sprawl into the countryside? and “Is it true that most lost spaces are located in the centre of cities?”

The first author to write about the issue of lost spaces is Roger Trancik, who has defined the term lost spaces, their causes and how the urban space should be redesigned. Kevin Lynch and Stephen Carr have discussed the wastelands as places on the margins, out of sight and out of mind. Catalan architect Ignasi de Solà-Morales uses the term terrain vague to describe the lost spaces that have been reclaimed by nature. Czech architect and urban designer A. B. Háblová calls these places “nonplaces” of cities and divides them into categories of lost spaces, landfills, transit, temporary and virtual spaces. French ethnologist and anthropologist, Marc Augé uses the term non-places (with a dash) to describe transit places where people only pass by.

The lost spaces emerged in Europe and North America in the 1950s and 1960s, as a result of growing dependence on automobiles, combined with designing open spaces, dividing cities into functional zones, reluctance to take responsibility for public spaces and closing of industrial parks. In Slovakia, the reconstruction of towns and cities has been implemented through demolition of old town houses and the construction of modern shopping malls, hospitals, schools, and low-density housing estates and industrial parks without a thought-out urban concept. After the privatization of former state companies, the production decreased and many factories were closed in the following decade.

The study aims to evaluate the spatial potential of inner towns and to determine the extent of buildable lost spaces within the built-up area and compare it to the development outside of built-up areas as proposed in master plans. Hypotheses and analyses are applied in the case study of three medium-sized Slovak towns – Humenné, Levice and Topoľčany, with the population of 20,001 to 35,000. The lost spaces were identified with the use of an orthophoto map and cadastral maps available through free map services (OCG) of the Geoportal GKÚ. Freeware program QGIS, using shapefiles and attribute tables, was used for the spatial analysis. Data were analysed in Microsoft Excel using Pivot Tables. The outcome of the analysis is presented in schemes and tables.

The research shows that there is certain spatial potential in middle-sized towns in Slovakia, but is not used appropriately. The first hypothesis was not confirmed for the town of Humenné, despite the large potential of more than ¾ of proposed development sites. On the contrary, the spatial potential of Levice and Topoľčany is even larger compared to the development sites. The second hypothesis was not confirmed in any of the towns, because the locations of lost spaces are often evenly spaced. The inability to confirm the hypothesis can be caused by multiple factors concerning both the town itself and its masterplan, such as its economic potential, the time and methods of masterplan elaboration that are often inconsistent. Unfortunately, emphasis is seldom placed on the vacant land suitable for development and recycling in the urban area of towns.

On the one hand, lost spaces are a problem for towns and cities, but on the other hand, they also comprise the potential for further development. They are places for implementation of urban revitalization, such as new constructions or green spaces. It is essential to find the optimal rate of intensification and expansion of urban structure, which might vary and be specific to each town or city. It is crucial to realize that towns and cities are living organisms, continually evolving, and it is neither possible nor desirable to reach full density of urban structure. A certain form of “feeling lost” in space gives cities an identity and space for growth, but the excess of lost spaces shatters the city into disorganized chaos. What ratio of the lost spaces is ideal or universal for all existing cities and towns and does it exist at all? Exploring and searching for the good ratio between built-up area and open space is the key to urban structure renewal.