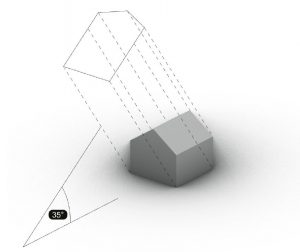 The paper focuses on the possibilities of the energy performance of buildings in relation to the production of greenhouse gasses during the construction and use of buildings. The discussion is aimed at the options the architects have when preparing the mass designs in the conceptual phase and the reconsideration of the indicator used in laws and regulations (the building shape factor calculated as): surface area to volume ratio of building. The argumentation is based on the exclusion of surface’s ability to produce solar energy, where this type of calculation is used in contrast to similar indicators, for example, Entwurfsgütezahl für Solarhäuser (EGZ) that includes also an approximation of the solar energy production ability of the object surface. The (shape factor) indicator of the surface area to volume ratio of building used in laws and regulations is thus an outdated method that only optimizes the thermal-insulation properties, without any regard for active solar systems and carbon-dioxide imprint (generated during the construction and general use of the building). Simultaneous optimization of both aspects of the building form: the active solar gains and thermal-insulation properties could achieve further carbon-dioxide imprint minimization. The question is whether it is possible to create a similar indicator to the surface area to volume ratio – the solar factor of shape, which would simply connect architectural form with the potential of the object to produce solar gains, even before the effectivity of active solar devices is taken into account, and thus connect the architectural form with the energetic side of the design.

The introductory section of the paper describes the process of the research, which has led to the development of two alternative methods of calculation suitable for conditions in Slovakia that include the missing potential gains by the surface of the building. To cover both sides of the problem (potential solar gains and thermal loses), the paper defines a new indicator, the solar potential of the object’s form, calculated as a proportion of solar effective surface (potential gains) and entire surface area of the object (potential losses). The first method of calculation is similar to EGZ and it is based on projections, the second one directly uses simulations of solar radiation in Grasshopper Ladybug software. As this new calculation is defined as the proportion of the surface area of an object, unlike the shape factor, it is not dependent on its volume. The comparison of the projection and simulation methods has shown that the simulation technique seems to be more precise.

The next part of the research has focused on the development of an algorithm with a quicker, more effective calculation of the solar potential, based on a more precise method of simulations. Such a tool could be used for solar potential calculations without computer technology or for making the otherwise time-consuming evolutionary optimization of the form faster. The algorithm was developed in defined model conditions on the model building form – a model block representing the mass of a building with variable proportions and horizontal rotation (orientation with respect to the cardinal directions). Since the solar potential is not dependent on volume, the model block had defined exemplary volume of 1000 m3. The acceleration and simplification of the calculation were achieved by means of the function of the potential and the object’s surface orientation. This function was created based on numerous simulations. This way the time-consuming simulation was avoided, while the precision of the calculation was preserved.

The output of the research is an algorithm that uses this function to determine the object’s solar potential in defined, model conditions, expressed as a percentage. The algorithm was created from these steps: break-down of the object to its surfaces and calculation of the individual potentials of these surfaces in the percentual values of their areas with the mentioned function of the solar potential and rotation. The sum of these partial potential areas is the resulting total solar potential surface area of the object. The final indicator is defined as the proportion of this solar potential area to the entire area of the object. The outcome of the calculation is thus a non-dimensional percentage value. This algorithm was used to calculate and record all the possible solar potentials of the model block via graphs and tables. Subsequently, the maximum of solar potential was determined – an object with ideal proportions and orientation which also optimizes the potential solar gains and thermal loses. The optimum found was compared with some of the significant states of the object (e.g. an ideal shape for surface area to volume ratio).

The paper also describes the usage of the algorithm without computer technology, which further widens its possible utilization. The next section clarifies the algorithm’s usability in the evolutional optimization of the object’s form, which changes the static, normative value of the indicator into a dynamic tool, offering automatic improvements of the form.

The conclusion of the paper analyses the paradigmatic shift, based on the beliefs that in relation to the carbon-dioxide imprint, we have reached the limits of the thermal-insulation properties of the building structures (the thermal insulation width and glazing). The question of active building input in the energetic balance has gained in importance. There are also well-known cases of objects producing more energy than they are able to consume. They represent the models of independency (island systems) and decentralized energy production at the place of its consumption, which minimizes loses caused by transport. Improvements in solar energy management and distribution lead to dynamic cooperation between objects without the need for energy storage. Internet of things thereby creates a system with automatized sharing of the gained energy between the objects. The objects that are locally without energy are supplied by the objects with local energy surplus. It is even possible to predict the process with respect to meteorology, where the aim is to integrate solar energy more effectively into the distribution network – and to optimize the distribution network management during fluctuations of energy sources. It is the growing phenomenon of virtual power plants. The quality of the environment during the summer season, in contrast to the heating season, is now another frequently discussed topic. Air-conditioning and cooling devices consume more energy than the heating. Therefore, searching for new energetic sources and design principles could help to optimize the annual cycle of buildings. One of these principles could be the application of the integrated PV systems in the building envelope.

The coming paradigmatic shift thus also brings gradual limitation of the thermal-insulation properties of structures and increasing effectivity of the transfer and usability of “green” energy with lower carbon-dioxide imprint and ecological impact. The consideration of the energy effectiveness of the buildings can be expected to free the way for calculations of the carbon-dioxide imprint.