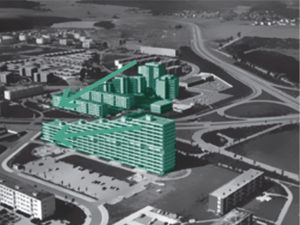 The paper deals with problems of modern architecture. It provides a review of monument protection and sustainability of 20th century architecture. This problem was the main topic of the international workshop Reworking Detmerode which took place in Wolfsburg (Germany). On the example of a case study represented by student works from the workshop the paper presents the possible methods and approaches to the issue of modernism.

Wolfsburg is a young city which has been since its inception linked with modern architecture. The evidence is in numerous buildings designed by leading architects of the Modern Movement such as Hans Sharoun or Alvar Aalto. Life in the city is closely connected to the production of cars in Volkswagen Company and thus strongly based on car traffic and functional segregation. These circumstances let to creation of satellite-towns (housing estates). Housing estate Detmerode built in 1963-1973 was the first of them. This city district has a lot of problems typical for the mass housing, but the fundamental problem is the decrease of population and dependence on inner city and Volkswagen factory.

The first student work deals with these issues on urban scale of the whole neighbourhood. The proposal based on the principle of intensification is focused on the energy efficiency and functionality of the housing estate. The other student work focuses on the structure of terraced apartment building “Stufenhochhaus“. The aim of this work is to find the most appropriate form of restoration of this iconic building, to preserve the values and in the same time to adapt it to the present conditions. While the one student work is focused more on innovations and change, the other is focused more on restoration and conservation. However, in the final proposals it comes to a compromise between these two poles. It is clear that nowadays, but especially in the future, it will be crucial to find appropriate balance between authenticity of the building and its economic efficiency in order to ensure sustainability.