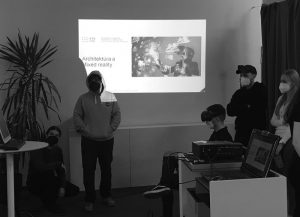 Technology is one component of larger social, economic, and business revolutions that will continue to have a substantial impact on the markets in which architects deliver services. Virtual reality (VR), the popular term for what is generally referred to in the technical field as virtual environment, is a methodology that originated in informatics, optics, and robotics. It has its foundations in computer graphics. The term was used for the first time (in the context) by the CEO of California-based VPL Research Inc., Jaron Lanier, in the 1980s. The term cyberspace, which is frequently used as a synonym for VR in American technical literature, often defined as a space which spreads in another world existing in a computer, appeared for the first time in 1984 in Neuromancer, a science-fiction novel by William Gibson. However, some VR techniques had already been explored in the 1960s. Technological progress now enables blurring the boundaries between reality and the virtual world. VR is an alternate computer-generated world that responds to human interaction and the virtual world is a digital representation of the real world. The user is immersed in the scene through special glasses and normally also headphones and is perceptually isolated from reality in a 360° view. Some interaction is needed. This paper presents selected links between the complex fields of architecture, use of virtual reality (as a part of computer science), and their potential in helping tackle crime. The presented information sets a general background for the development of a put forward prototype of new immersive learning experience to provide deeper understanding of CPTED concepts to enhance the traditional curriculum and the overall retention of knowledge. The theory of education is also influenced by new technologies. There are scientific studies suggesting VR learning may be more efficient than learning in the real world. Educational programs and virtual workspaces are one of the possibilities of using mixed reality in the near future. Current VR systems provide new capabilities for perceptual expansion, for creative construction, and for unique social interactivity. VR seems to be the most humanistic approach to information, and it enables its users to change the world into a place where it is easier to learn. The potential of VR and AR in education can be seen also in mastering core skills in various settings, learning abstract concepts in complex fields (like architecture), or experiential child learning. There are now hundreds of university architecture programmes with VR and AR labs all over the world. VR focuses its users more on the content and stimulation of their senses. It is a good tool to experience phenomena that are impossible or difficult to experience in the real world. Learning can be more effective if it is experiential, which includes strategic problem-solving skills and critical thinking – tasks that virtual reality is perfectly suited for. The greatest effectiveness in learning is usually achieved with different learning styles combined, involving hearing, seeing, and doing at once. VR incorporates all of them. Urban planning and architecture show significant potential for crime prevention. There is a direct relation between crime and architecture of an environment – its layout, quality, maintenance, and management. The main role of architects is to create artificial environment that provides a safe place to live – protected from climate conditions, weather, and from an enemy or intruder. We have also changed the way of designing of and thinking about our cities, including safety. The global nature of crime necessitates international co-operation in the field of prevention. An example is a CPTED (Crime Prevention Through Environmental Design) security concept. Alternative terms may include Designing out Crime (DOC), Defensible Space, or Crime Prevention Through Urban Development (CPT-UD). The CPTED movement officially emerged in the 1970s as an innovation aimed at the reduction of crime with mainly architecture, urban design (urban planning), psychology, criminology, and facility management coming together. There is potential for the use of ‘new’ visual stimuli in broadening our understanding of housing design, burglary risk and CPTED. These now commonly used technologies can improve our understanding of the links. Both VR and BIM can arguably be used to explore all types of crime and enhance the use of CPTED to prevent such crimes. VR technology is considered to be highly useful for simulating real-life situations that are otherwise too costly or risky to experience. Potential benefits of VR in CPTED can go far beyond a high-quality visualization tool: it can be used in the design, evaluation, and training process. There are not many practical studies on the use of VR for CPTED purposes, which points at a niche for more research to be conducted. VR has also immense pedagogical promise, with the potential to not only assess hypothetical environments, but also to track, shape and inform subjects’ thinking towards them. In sum, VR offers a considerable opportunity to gain insights into the general perception of and emotional responses to proposed designs, reduce prototyping costs and design faults, evaluate different scenarios against specific criminogenic variables and identify built environment variables associated with different types of crime.