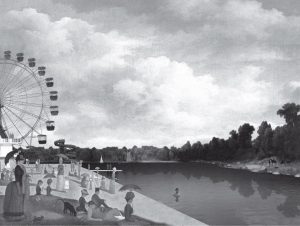 The Kiev Islands are forced into a state of schizophrenia. Two ideologies claim their rights to inhabit the islands. Conservation and Exploitation trigger and enhance contradictory processes that establish zones which have to deal with strong pressures from both sides. Leisure and commercial activities spontaneously occupy spots with connection infrastructure and blur on a large scale with the zones of legislative reservation of value natural environments. The Eden of untouched nature meets the paradise of uncontrolled development speculations. Pursuing efficiency and sensations on one side, and values and nostalgias on the other, result in the situation in which visions and strategies have to be formulated.

The project Paradise Lost proposed for an international competition “The Kiev Islands” is examined as part of a series of further projects developed by OFCA. Office for Collaborative architects is a formal framework that identifies the way the projects were developed. Other conceptual frameworks, as emptiness, identity, concentration and urbanity, are identified and argued with the aim to formulate a design strategy.