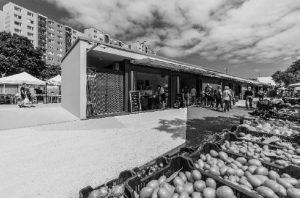 Markets – as physical areas for trading goods and food, and for social interactions – have always played an important role within the urban fabric. Budapest is well-known for its public market halls in the historic city center; however, this paper focuses on three contemporary market projects implemented within large prefabricated housing estates in the outskirts zone.

In Újpest Center, the new food market was only one element of the complex renewal of the district’s historic center, not far from one of the biggest Hungarian housing estates. The Main Square program started in 2007 and – based on an ambitious urban concept submitted in 2018 – a compact big building hosting not only the food market but also a cultural centre on the upper floors was opened. In Békásmegyer, the objective of the food market project was to create a new building in the centre of the mass housing neighbourhood and, at the same time, to reshape the open space system. The renewal process started in 2012, the market was opened in 2019, and the open space renewal was finalized by 2020. The third example presented in the paper is a temporary market in the Havanna housing estate. This small-scale 2020 award-winning project reused the former marketplace while introducing contemporary architectural values into this stigmatized modern neighbourhood of Budapest.

Budapest’s mass housing estates were built between 1960 and 1990, and their social and physical context has changed a lot in the last thirty years. However, the real renewal process with technical renovation of residential buildings, open space renewal, social programs, and public building construction or reconstruction projects only started in earnest after Hungary’s admission into the EU in 2004. During the state socialism era of the Central and Eastern European countries, the architects’ freedom in the planning, design and construction process of the large, prefabricated housing estates was strictly limited. The most important determining factors of design were the socialist norms, the types related to urban infrastructure – building, flat, constructive detail, and the location and the personalities of the professionals and political players involved. The research attempts to explore how this situation changed and what the actual influencing or determining factors of a public project process regarding the renewal of a modern housing estate are.

The three case studies from Budapest, i.e. the new markets opened in the last few years, provided an opportunity for a comparative approach. The data is based on the fieldwork, analysis of the relevant plans and publications and online surveys with the prominent architects of the contemporary markets. The questions focused on the budget, the main “players”, references, physical context (built and natural), social context, program, structure, materials, and technology. It is important to recognize that all three architects described their projects and the whole process as successful. The concept plan provided the essential input for the final project, and during the construction, the concept of the architectural project did not change significantly. Nevertheless, besides the short analyses of these three housing estates and their new market areas, our research concentrated on the complex context of these architectural interventions. How are the contemporary markets positioned in relation to the existing modern urban fabric? How was the architectural design process influenced by the surrounding urban physical and social context? What architectural and urban qualities do these new markets offer to the housing estates?

Even though the design of these neighbourhoods was mostly determined by the socialist norms and the prefabricated technology, contemporary architects working at the edge or within these modern heritage areas consider the existing social and physical context to be one of the most important factors influencing the design. Based on the surveys conducted with the architects of the markets, we could say that in these cases, the professionals surpassed the typical functionalist approach of the modern mass architecture worldwide that disregards the local context and focuses on the structure, the function, and the form. In consequence, we could argue that the global products of the 20th century urbanism, the mass housing neighbourhoods, have also local attributes and future-oriented designs use them as a fundamental basis. At the same time, it is important to highlight the responsibility of all the people involved (the designers, decision makers, and residents), because depending on the program, the building and the open space design are relatively unrestricted. Although the architects had no special requirements to meet regarding the structure, materials, technology, colours, etc., their contemporary design reflects the local “will” by the scale of the program. In this way, they introduce not only new aesthetic but also new meanings and new potential for the everyday use of the intervention area, both outdoors and indoors. The aim of these food markets is to offer not only good shopping opportunities but also a possibility to meet, socialize, and enjoy a large “well-designed” functionalist housing estate.