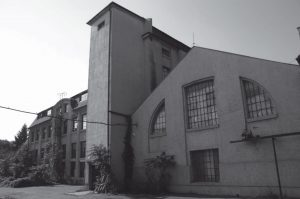 Industrial areas built at the turn of the 19th and 20th centuries represent a significant part of the society and its cultural heritage. Classifying the values of industrial buildings, many find the values of historical documents, the technical, social and scientific ones as the most important, while the architectural artistic value stands apart. This report focuses on this aspect of industrial architecture.  Examination of architectural forms and decoration of the particular industrial objects is the main topic. The paper is focused on decoration as a specific value of industrial heritage. Selected for the research were the Hungarian municipal thread factory of G. Roth, the rubber factory MATADOR and the thread factory Danubius in Bratislava.

The municipal factory of G. Roth represents the style of decoration which was used at the end of 19th century and is known as industrial style. The buildings are usually one floor high, with a facade, where the bearing structure is represented by brick pilasters between plastered walls. Such types of building can be found in many Austrian and Hungarian cities. In Bratislava, this style was used by the famous architects from the Feigler family.

There are many different types of buildings in the area of the Hungarian thread factory on Parickova Street. The most dominant one is the spinning house, whose design was influenced by the English type of thread factories. The Hungarian thread factory had a decorative facade, but after the reconstruction the spirit disappeared. The other buildings in the factory have interesting details, forms and functions as well. One of the more decorative facades is on the single-storey building of the finishing house, which is a representative of industrial style.

The rubber factory MATADOR is the oldest part of the city district of Petržalka, which is situated on the left side of the river Danube. Most of the buildings in this area of the town were destroyed and many blocks of flats were built instead. The contour of the factory has a sharp shape created by saw-tooth roofs on the production halls. An unusual production hall with a double-rounded form is placed in this silhouette. The whole factory is made of iron, concrete, and a typical ochre brick. This combination of materials creates a characteristic decor used on each building of the factory.

The Danubius factory was designed by Julius Mayreder, one of the Vienna architects, who was part of the Secession club. Therefore, the building has a decoration influenced by secession architectural style. The form of the main building which is protected by the state is created from a large main content with added towers. This form with decorations creates one of the most interesting industrial buildings in Bratislava.

The architecture of Bratislava at the end of 19th century and the beginning of 20th century was influenced by nonresident architects and owners of factories, who had a lot of experience from the past. These sorts of impact created an attractive mixture of industrial architecture in one of the most industrial towns of that period.