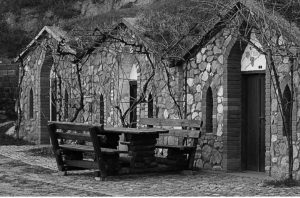 The history of winemaking dates back to the 8th millennium B.C. It is connected to vineyard buildings. The historical traditional form of vineyard buildings and cellars in our country started to develop in the 13th century A.D. and in various forms has been preserved until now. The late 20th and the early 21st century, in the context of new production technologies and development of wine tourism, forms a new wineries architecture of such structures that try with their function, morphology or materials combine wine with an experience. This creates a new distinctive architectural style.

This new architectural form gives some hope for the revaluation of the former agricultural premises, which after 1989 started to use only 40-50% of their potential for conventional agriculture. Many of them disappeared completely and thus appear in the landscape as unwanted brownfields. Places suitable for grapevine growing are almost predestined to this function. Other areas, however, do not need to be left behind. In addition to wine, also hops, sugar beet and other “technical” crops can give these areas new, meaningful content. Regarding these areas not only from agricultural point of view, they can serve for manufacturing, crafts or services. Even their conversion into public and residential buildings is not rare. Interest in living in the country is growing. Why to invest into expensive open green spaces, when we can revaluate the existing abandoned ones. It would surely contribute to better social integration of new residents of villages.

The study major Architecture at the Faculty of Civil Engineering in Brno has been doing research and study project work in rural areas for several years with the aim to find the most universal methodological approach to increase the value of the former areas of agricultural cooperatives and to facilitate the formation of the rural landscape of the 21st century:  economic, ecological and aesthetic. The attempt is to unite these imaginary triple E into one A as architecture. With a difficult goal – to influence the way of thinking of the people who are in charge of building in agricultural setting and try to restore architecture of these buildings, respecting the tradition developed and implemented in projects of many Baroque farmsteads by the Czech architect of international importance Jan Blazej Santini-Aichel.