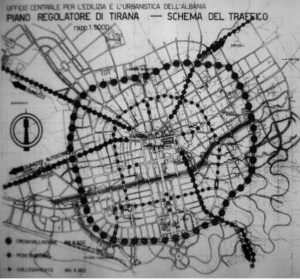 This paper examines the process of urbanization and development of the 20th century architecture in Albania and evaluates it in the context of synchronous development in other Eastern and Central European countries. The topic is on the representative urban public spaces of high ideological importance for authoritarian political regimes, of which the most prominent was the central boulevard in Tirana and its focal space – Scanderbeg Square. Development of this space is framed with the events of 1) establishment of the modern Albanian state, which emerged with historical delay after the Balkan wars in 1912—1913 and 2) the fall of dictatorship of the communist party in 1990.

In the first half of the 20th century, Albania experienced a period of authoritarian monarchist regime, leaning towards the fascist ideology. It aimed to rebuild the small town of Tirana into the new capital city. The conceptual foundations of Scanderbeg Square as the “square of ministries” were laid down in subsequently developed urban plans. The most decisive were the plans delivered by Italians Armand Brasini and Fiorestano di Fausto. The first constructions of the new centre of Tirana started in 1930s and during the World War II, when Albania was occupied by Italy. After the successful antifascist resistance that defeated Italian and then German army at the end of the war, Albania experienced a seizure of power by the local communist party (PPSH), accompanied by an ideological overturn.

In pursuit of neglecting previous social and political formations (Ottoman, feudal, fascist, and capitalist) and further amplifying its hegemony, the socialist regime adopted several strategies based on demolition, recycling, adapting and re-building the architecture of public spaces of Tirana. These strategies were applied perpetually in the process of further constructing of Scanderbeg Square during the 40 years of the socialist regime. The most significant new edifices were the “Palace of Culture” (1960–1962) and the “National Museum of History” (1979—1982). They mirrored the changeovers in peculiar foreign policy of the Albanian ruling regime and the congruent metamorphoses of its official ideology. After the initial aligning with the Soviet block, Albania diverted towards Maoism in 1960s. After disintegration of the Chinese-Albanian relations at the end of 1970s, the country found itself in a kind of non-alignment and autarchy regime. At the end of this period, Scanderbeg Square became an over-scaled monumental space demarcated by edifices of state institutions.