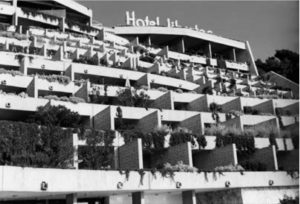 We propose to present the regional project Unfinished Modernisations—Between Utopia and Pragmatism: Architecture and Urban Planning in the Former Yugoslavia and the Successor States, which was conducted by a group of researchers from Slovenia, Croatia, Bosnia and Herzegovina, Serbia, and Macedonia 2010-2012. We stress the need for the reconstruction of the common architectural history of the broader region of Central and Eastern Europe.

Upon the collapse of the socialist state, the architectural history of Yugoslavia had a similar fate to that of another failed multinational state in the region, Austro-Hungarian Empire: partitioning according to new national borders. Like Austria-Hungary, Yugoslavia was also a polycentric state. Federal organization of the state and programmatic emancipation of constituent ethnicities resulted in distinct architectural cultures in each of the constituent republics, yet under a shared political-economic system and within the framework of common societal ideals. The diverse architectural cultures within a small territory were continuously informed by exchanges with the international epicenters of architectural knowledge. The result was a set of specific architectures that simultaneously reflected the local conditions and global tendencies. These achievements still await critical incorporation into the history of architectural modernity, demanding new analytical and interpretative tools.

Despite the fact that Central-Eastern Europe after World War II consisted of independent nation-states with their own distinct cultures, most of them shared the general conditions of state socialism, thus raising a similar set of questions to the ones addressed in Unfinished Modernisations. We offer the project as a possible model for such examining questions.