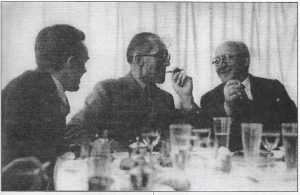 In 1935 in the journal l’Architecture d’Aujourd’hui, there were published several articles on architecture. One of the articles is “Pictoresque Journey around Central Europe”. Prague, Vienna, Bratislava, Budapest and mainly Zlín. “Rational and highly functional architecture” surprises. Zlín is a specific example, it is a holistic concept of new industrial town. This relates to a mutual relationship between production, housing and recreation. The next important aspect is the speed of realisation. And of course typisation. In 1947 in Prague was opened an official exhibition of French architecture. A group of architects was invited and the interest of Le Corbusier, admiration of Perret and other architects of French group were not only polite answers to invitation from the Czechoslovak side but much more – recognition of a certain concept of architecture with the example of Zlín.