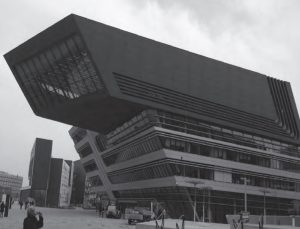 The first part named Architecture in Movement focuses on movement in the terms related to evolution of architecture as an art discipline. The reasons and motivation behind the idea of integrating movement into architecture in various periods will be implied and followed by the description of means and tools used by architects to achieve the integration. This part also contains a study on all the possible determinants enabling the architecture motion.

In the second part of the paper, Movement in Architecture, we summarise the results of the methods identified in the first part. Architecture working with the element of movement is constantly fighting with the paradox that in order to achieve its fundamental purpose of providing a shelter, the elimination of movement is required, i.e. of all the moving forces involved. Only then when the above conditions are fulfilled architecture inlays back the movement into the now statically stabilised environment.