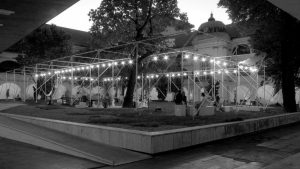 As architectural theorist Bencová states in her writings: “Classical history of architecture is built upon consistent architecture which demonstrated a certain way of thinking about architecture at the time of its origin, and on concepts of often torn-down and unpreserved structures and concepts which had one feature in common—the fundamental permanence.” (Bencová, 2010) The desire for permanence was one of the main features of architecture – temporary architecture with its limited time scope was only verifying this logic—by temporarily changing environment after which the status quo was re-established. Special events, due to which temporary architecture was constructed, were merely perceived as “disruptive moments” interfering with the otherwise linear passage of time.

The next milestone in relation to time and temporary architecture can be seen in the theories of the association called “les événements”—”events“, which was established in 1968 in reaction to the social and political changes occurring in the period and the result of which was the introduction of the terms “event” and “movement” in architecture. This theory was later pursued by architect Bernard Tschumi. He established the term event architecture, what he describes as architecture that is tied to an even—a moment in time rather than to its physical structure and the space it creates.

Nowadays, there are structures related to festivities (linear points on the time axis—which are held for example because of an important anniversary in a particular town) and, at the same time, structures that are built because of cyclically occurring events and structures that are built as attractors in public space—there are multiple periodically repeated events, one-time events with different cycles of their repetition, which makes it impossible to identify the time culmination of these events, and only the flows of temporary architecture can be observed, rather than the peaks, which could be identified in the past.

Regardless of the uniqueness of architectural objects that are often results of attempted architectural experiments, it is possible to establish certain categories within the subject, which, besides the formal aspects, help to explain the relationships and analogies within. It is possible to identify certain common characteristics, based on which individual objects can be classified, with focus primarily on the time context, their intended purpose and content, not the space specifications of the objects.

Based on various aspects, temporary architecture can be divided into sub-categories as follows:

Temporary architecture and its forms have transformed over time. We can state that nowadays, for the first time in the history, there are structures being built for different reasons such as for their ability of catalysing the space and bringing disruptive moment in the urban tissue. Unlike in the past, with the structures pragmatically utilitarian, or naive and decorative, and demonstrating the technological progress in the society—contemporary temporary architecture is seeking its purpose in the attempts to change public space and our behaviour in it.

Design process of city development, cultural institutions and public spaces that has been applied up to the present point is expanding its scope to include the implementation of temporary, flexible, or movable elements in the urban tissue. Thus, contemporary city is not only concentrating on planned, permanent unvarying places—public space should be able to respond to informal, impromptu needs of city. Permanence of these structures can mostly be seen in the sustainability of society’s lively participation in the public space, unusual use of the public space, or promotion of contemporary art and architecture. Temporary structures and concepts bring new possibilities, test different scenarios and present new ways of thinking about urban planning, about how spaces should look like and how they should be perceived and used. The value of such temporary architecture is significantly determined by its programme and utilisation, establishing it as a respectable city attractor.