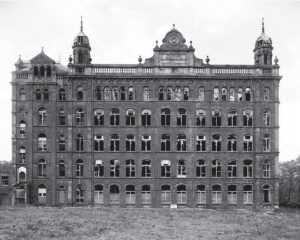 As shown by the comparison of the examples in the paper, it can be said that the architecture of buildings made use of various principles. First of all, the architectural form and decoration of the building was influenced by its function. Next influential elements were the owners and the architects. An influence of foreign investors and their previous building experience is still visible at current structures, too. However, the local building tradition was also one of the formative impulses which influenced the look of buildings within an establishment. Last but not least is the form and decoration influenced by the time of its origin and advance in the building industry in the field of new construction materials. The brick, as an easily accessible building material, created the basis of all buildings and was markedly expressed on the façade in spite of the fact that the bearing system was created by cast iron or concrete.

As a result of the combination of all categories of influences and impulses, which created industrial architecture, a special look of factories forming their cognitive element in the landscape, was created thanks to the place of its creation. In spite of owners, builders, functions or the environment a new building, inspired by decorative elements from the whole spectrum containing not only industrial building, was accomplished. By blending these parts, an ideal space for machines was created, gave work to people and now marks past prosperity of the region. Decorative attributes of these buildings emphasize their importance in our history and create an image of cities.