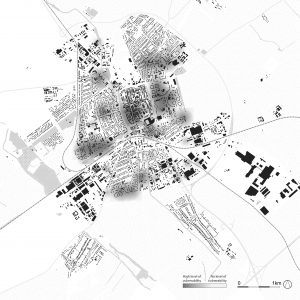 In the coming decades, our cities will face extreme weather caused by climate change, which they will have to adopt. The most significant impacts on Slovakia are characterized by an increase in the number of tropical days, average air temperature, concurrent heatwaves and droughts, sudden and regional floods, and a decrease in relative humidity. In the urban environment, the increase in the amount of sudden and intense rainfall results in increased demand for infrastructure, rising temperatures, and heatwaves creating urban heat islands, increasing the risk of negative impacts on the quality of the life, health, and safety of the inhabitants. To address these challenges, cities initiate the adaptation process by preparing the ground for adaptation, assessing risk and vulnerability, developing an adaptation strategy, implementing adaptation measures, and by subsequent monitoring and rethinking of the effectiveness of applied measures. Despite the fact that the National Adaptation Strategy of the Slovak Republic identified the adaptation at local level as essential for urban environment, within the last 8 years since its adoption, only 8 out of 141 Slovak cities in total have elaborated the adaptation strategy for impacts of climate change. This paper thus explores in more depth one of the initial parts of the adaptation process, part of the vulnerability and risk assessment, as an often-overlooked area in the field of spatial planning. The aim of this work is to broaden our knowledge of the two most significant impacts of climate change –heatwaves and floods– on urban structures in Slovak cities and validate the importance of spatial vulnerability analyses as a considerable tool for the expected unified national methodology for developing local adaptation strategies. This study examines the spatial vulnerability analyses of Hlohovec, Kežmarok, Košice – Západ, and Trnava prepared by Karpatský rozvojový inštitút as a part of vulnerability assessment within the framework of adaptation strategies of these cities. The organisation is a leader in adaptation planning in Slovakia and the creator of a unique method of adaptation strategies in Slovakia. These analyses allowed us to compare cities, identify the most vulnerable urban structures and consequently understand the causes of vulnerability of urban structures in Slovakia, which is crucial for further development of the adaptation strategies and the building of resilience in cities. The research outlines the urban structure of the cities examined, provides an exploratory spatial analysis of vulnerability hotspots, and, based on the findings, defines the principles of spatial planning and urban structures resilient to the impacts of heatwaves and floods. In summary, the results show that the structures most vulnerable to both heatwaves and floods are urban structures with a high concentration of inhabitants. Problems lie in the centres of cities with dense public amenities and a historical footprint with large paved and unshaded areas without vegetation and a lack of trees that could help create the suitable microclimate during heatwaves and infiltrate rainfall. From the point of view of heatwaves, the most vulnerable areas, except for the city centres, are the surroundings of kindergartens, schools, train or bus stations, grocery stores, or local centres with amenities. From the point of view of floods, the most vulnerable areas are extensive parking lots with impervious surfaces and the main transport infrastructure, which suffers from the insufficient runoff capacity of the sewer systems. The results confirmed that the vulnerability of cities to floods with the impacts of climate change is no longer only a problem of the waterfronts. The research shows a significant difference between the vulnerability of residential structures. On the one hand, there is the structure of individual or terraced family houses and low-rise apartment buildings with up to 6 floors, which is resilient to the impact of climate change in Slovakia. On the other hand, mass housing structures of prefabricated apartment buildings with 8 to 14 floors are vulnerable to the impacts of heatwaves due to poor technical condition and energy inefficiency of the buildings, leading to overheating of the indoor spaces. Despite the abundant areas of vegetation, their surroundings are also vulnerable to the impacts of heatwaves and surface floods. The findings of this research outlined that the vulnerability of citizens to the physical environment of the city has a great impact on the spatial vulnerability assessment of urban structures and showed how crucial it is to place importance on the form of urban structure as well as its surroundings. Urban structures that are resilient to the impacts of heatwaves and floods are based on the idea of accessibility and short distances, polyfunctional structures, and mixed use within buildings and within the city, which helps to reduce the concentration of inhabitants in one place, and to reduce the need to develop extensive parking areas and transport network, which has proven to be a problem of the existing structures.  Overall, these results suggest that spatial vulnerability analyses have the potential to be utilized in the development of national methodology for local adaptation strategies and as part of background analyses for land use planners. Further development of their application within the processes of urban design and planning should also be examined in the nearest future.