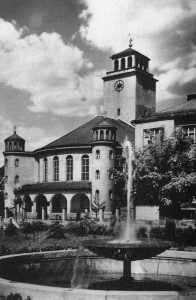 So far, the construction background of the Evangelic church in Trnava, designed by the architect Josef Marek, has not been systematically investigated. Even though that the construction of this interesting building of sacral architecture was preceded by a competition, the forms of participating projects are not known. That is the reason why it is impossible to understand fully why Josef Marek finally decided for a non-traditional amphitheatric concept.

In the Evangelic vicarage archive has been found some project documentation from that competition as well as some older plans of the church which have not been properly examined by experts yet. They probably served as a basis when considering the modern form of the Evangelic church at the beginning of the 20th century. Among the projects there is also a design by Vienna architect Ludwig Schöne designed with an oblong ground plan and in the style of Historicism with Neo-Romanesque and Neo-Gothic elements. There are also some projects from the early 1920s, in which the competition jury clearly defined the essential requirement for the church – the form of an amphitheatre. Not all architects who took part in the competition were able to accept this condition. Some documents reveal that in the end only two architects designed the church in the form fulfilling this requirement.  It is assumed that these architects were František Gahura and Juraj Tvarožek. Nevertheless, the jury expressed their discontent and finally the project was assigned to Josef Marek who managed to fulfil this task in compliance with the requirements of modern Evangelic liturgy in full extend. The built church was not comparable to any other church from the inter-war period in Czechoslovakia. The building is valuable especially for its simple clear substance and from the outside recognizable amphitheatric layout that was very innovative for that period. Interesting features are its location on the site bordered by the fortifications and the design of its roof construction which Jozef Šimončič pointed out in the past.