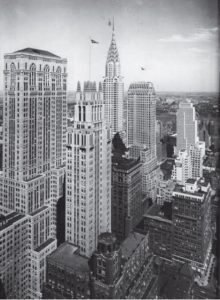 Prior to town as a higher form of social living, there was gradual settlement of natural landscape. Man came into contact with this landscape and started to transform it according to his concepts and requirements. Primary characteristic attributes of a town are its boundaries or demarcation of its territory by fortification walls behind which – intra muros – social life took its place. Social life was governed by power of law that was in performance on this territory.

Gradual development of the society has enforced the change and introduction of new laws, regulations and restrictions even to the field of building the towns, their urban planning. All of them implied stratification of the “occupied” territory. The article describes the topic of regulation of building activities taking place on the territory of the United States of America, in New York City above all. The Zoning Law from 1916 set the limits for building within blocks, however it determines the functional use of a site, its cover with a structure as well as its mass/substance spacing e.i. how is the substance of the building spatially arranged, the so called Setback Buildings. This new aesthetic paradigm had a direct impact on visual shape of the whole New York City. Its main aim was to improve penetration of sun light into the city, supply of fresh air and improvement of hygiene. Historic development pointed out to negative impact of such regulation resulting into legislative changes and introduction of new regulations, the Floor Area Ratio (FAR index) which was expected to stimulate the developers to build on sites of smaller areas. This concept of building regulation started to be used in many countries of the world.

The author analyses the topic on the example of Bratislava and its territory, especially the locality of Čierna Voda. In the forefront is the aspect of degree of regulation and subject of regulation within an urban space. When speaking about changes to environment and efforts in lowering the energy consumption of structures, it is important to speak within the scale of built complexes of structures, the whole town or agglomeration.