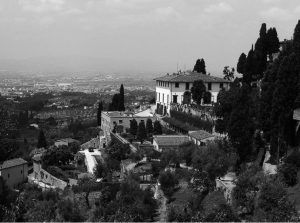 Plants as the elements of dual nature, which involves the natural (particularly biological) and socio-cultural aspects, are specific composition elements in the historical urban environment. These elements bring to the urban environment dynamics via its continual changing, growth and development, as an essential feature of every living being. In many cases they play significant role in the visual perception and overall character of the city and its inner spaces. The extent and individual form of vegetation elements in historical urban places is primarily affected by the historical and urban development and natural conditions of the place. Each era is distinctive by its own interpretation of relationship to the nature. History of urbanism does not recognize any era, in which gardens and vegetation elements were not developed together with architecture, or at least, that they were not accepted. From this point of view each era works with its own representation of natural elements and their specific use in urban environment.

Some cities in the Middle Ages did have trees in public open spaces – they were located mostly adjacent to a religious institution or near the city walls. Trees in church squares provided shade for markets, and they carried also various kinds of religious symbolism. However, the usage of trees in urban open space did not alter much from the medieval times. Renaissance definitely shifted the meaning of the relationship between man and nature. The most important role played the garden, which gained the equal importance as architecture and became an integral part of the building as an extension of the living space. In the second half of the 16th century another considerable step was made – the first plantings of trees occurred on the top of the city walls, as at Lucca, Antwerp and others. The lines of trees were being inserted as isolated elements into the urban landscape in the form of promenades at the edge of the city atop large city walls. During the era of baroque and classicism new ideas about urban space and urban defence led to new spatial forms for the city, and new ideas in garden design led to innovative uses for trees in cities. It brought further use of row of the trees in variety of forms – alleés, mails, cours, boulevards and series of promenades of varying form. In the 18th century vegetation elements began to reflect fresh ideas about the nature and rethinking of nature in the cities. The 19th century referred to as “golden age” of gardening with a large scale of plant species in use, is typical for cosmopolitan mix of landscaped urban forms, amongst all the parks, park squares, promenades and riversides with their variety of forms, were the most important.