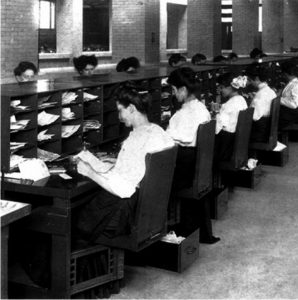 We spend one third of our day or even more in an office. In spite of this, we live in a society which is more focused on the interior design of residential spaces. We are ready to pay for an excellent car design, but we often not willing to admit the fact that we spend much more time in our office than in a car. The office space has a significant influence on our life, even though we are not always aware of it. Offices are nowadays mostly open-plan spaces, the cell-like offices are becoming less common.

The open-plan office buildings are nothing new in the architecture as they started to appear in the early 20th century. Their benefits have been emphasized from the time of their beginnings, but their disadvantages have not been sufficiently discussed yet.  The issue of open-plan offices presents a big potential in respect to improvement of the environment in which office workers work every day. It has not been sufficiently explored and there is little attention paid to this problem. The same is true about the design of an individual workstation. In spite of the tendency to create non-territorial, nomadic open-plan offices with no personal working stations, there is still a strong will of the employees to have their own personal space for work – they insist on it as it helps them to identify themselves with the space and also with the company. This is the main reason why the personal working stations still exist and need to be explored and developed.

The article discusses both the historical context and the current knowledge of the issue, however it is primarily based on the results of the own research realized for the purposes of the PhD thesis of Ing. arch Zuzana Humajová. It examines employees’ preferences in relation to the design of workstations. In relation to the design of workstations a questionnaire survey was conducted in five open-plan offices in Bratislava and answered by 148 respondents. The majority of respondents spend their working hours in the open-plan offices with quiet activities such as writing, counting, scheduling, etc. A part of the survey was focused on the issues of satisfaction with certain parts of the working stations and further on the question whether the current state of the working stations fulfils their expectations. According to our survey, the most important issue is the lighting, i.e. the absence of an own lamp which may be regulated according to individual needs. Further, it is the height of the table and its adjustability and then the storage space for a bag or backpack. Based on the results of the survey, which are partially discussed in this article, can be said, that the open-plan offices in Bratislava need to improve or change their interior design and particularly their furnishing systems. According to the results of the survey, we can also infer that there is a need to incorporate more natural elements and colours to the office spaces generally, and also to the workstations. The future design of the work stations in open-plan offices should incorporate these demands and offer several alternatives to the nowadays widely spread but insufficiently variable office furniture. Future studies are needed; it is the only case study of this type and on this issue in Slovakia till now.