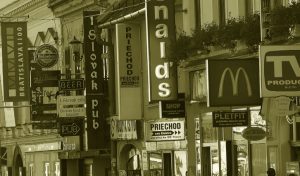 Advertisement is an inherent part of the urban interior, which becomes the most spotted and most presented aspect of the historical centre through direct contact with its visitors. It is the advertisement and commercial public spaces, which are part of a town’s ambience along with other components of the urban interior. In spite of the unquestionable positives of revitalization of the neglected historic town centers in Slovakia after 1989, commercial pressure has also brought many negatives, mostly in relation to the protection of cultural monuments. The primary mission of the care of historical monuments is to preserve their authenticity and to restore the cultural heritage. This mission, however, nowadays faces the problem of how to apply the necessary commerce in the town image to a reasonable degree and with respect to the cultural and historical values of the background, which are accepted community-wide. The structure of the thesis corresponds with the issue in question, reaching also into other branches of science. Researching in the processes of regulation, creation and approval of new elements has to be preceded by the definition of classification of terms and the examination of phenomena related with marketing, ethics and psychology of advertising. These chapters are arranged as the introductory sections of the thesis. The chapters regarding the relationship of urban spaces and advertisement in historical evolution and nowadays are analytical and summarize the available facts. Comparison with foreign examples not only serves as inspiration but also as learning from the mistakes of others. In the core part of the thesis, we have dealt with the analysis of problems and causes of their origin, while our ambition has been to present the basic resources and criteria for a differentiated approach to new production. The goal was to propose principles of successful regulation, not only in terms of the care of historical monuments and local authorities, but also the makers of advertisements themselves. The presented thesis has proved the outstanding importance of advertising, not only as the universal non-verbal means of communication between merchant and customer, or a town and its visitors, but also as an expressive element of the urban interior. It is apparent from the outlined history that advertisement has been an integral part of urban spaces right from their origin. The analyses processed have proved that the basic resource for a differentiated approach to advertising regulation is the concept of restoration of the historical urban spaces. Regulation of external advertisement for a particular place may be determined only through knowing the cultural and historical values of the surroundings, their hierarchy and subsequent concept of presentation.