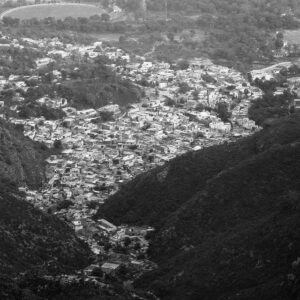 This research is based on the case study of Saidpur village, one of the oldest villages in Pakistan and the old subcontinent. Saidpur village has a scenic landscape and centuries-old historic importance. From the Mughal dynasty to subcontinent partitioning, this village has witnessed evolution of diverse eras. As people started to inhabit Saidpur, they brought culture, arts, folklore, architecture, traditions, customs, and their beliefs with them. The place first known only for being a garden resort with streams, mountains, gardens, and cattle farming, also became famous for temples and religious centres, folklore, and pottery work. Vernacular local materials from nearby areas such as stone and lime were mainly used to build constructions in the area. Brick was also used but was rare and more expensive than the local materials. The Saidpur village’s architectural art and heritage embraces three cultures; Sikhism, Hinduism, and Islam, concentrated on one node in this place. Saidpur currently has a total population of 8,437 where 58% of the population are permanent residents who have inherited this place from their ancestors. Emphasis of this study was on the urban pattern and growth of the village through past historic eras. It further analysed individual architectural case studies of each heritage building present on site. Since there were no proper or substantial records, data, drawings, maps, or any other information found on Saidpur, it was important to generate a study that would focus on Saidpur’s urban spread, history, architectural heritage, current situation, and future scope. This study has dissected and analysed the context, history, culture, vernacular construction materials and style, heritage, urban spread, and architectural elements of Saidpur. The Saidpur village has a formation of an urban pattern that started from a concentrated node at the centre of the village in 1500s. A Hindu temple was built that gave it a prestigious status of a pilgrim centre. This was further followed by building a Sikh temple with a Dharamsala, and a Mosque. In Saidpur, one used to hear the prayer calls from the Mosque, and bells and melodies from the Hindu and Sikh temples at the same time. With these religious and cultural centres, civilization in Saidpur also grew and has reached its maximum limits today. From a clutter of a few houses, Saidpur grew into a packed, walled to walled, and cluster-phobic village. Saidpur’s streets started to resemble other streets of old historic cities of the subcontinent such as inner (androon) Rawalpindi. This research has investigated and analysed this evolution and urban growth and presented a case study on the old and current urban and architectural characteristics of Saidpur village. It has presented a study of Saidpur’s population spread, timeline of construction and building spread, characteristics and ambiance of streets, as well as architectural features and elements and their transformation over the time, and construction styles or materials including their evolution. The centre of Saidpur serves as a main node in which all the temples and heritage buildings lie. This serves as the main hub and focal point of Saidpur today. This aspect of Saidpur where multi architectural and cultural heritage exists in one node, is unique and has gained Saidpur popularity. It is also a main focus of tourist attraction today, displaying the art of the past. In one perspective, one could see old domes and minarets emerging from the Mosque and temples lying here. This node mainly includes the heritage Hindu temple, Sikh temple with Dharamsala, mosque, an old gate to access the temples and Haveli. For some of the heritage buildings, even courtyards or landscapes are shared, yet people used to make their offerings peacefully in their respective temples. Our research has analysed this node of Saidpur and focused on analysing Saidpur’s heritage buildings in detail. It has presented a case on its historic architectural features that are decaying on site. The old and current construction methods and styles of the village were analysed and discussed. Heritage buildings on site were documented, analysed, sketched, and reviewed in detail to generate and preserve its historical background, architectural details, and construction style. This study has evaluated and recorded all the architectural information related to the heritage buildings on site to formulate records on the old and present Saidpur. In addition, the case presented on the current condition of decaying heritage on site intends to create awareness on the necessitated protection and promotion of this ancient village. This study included multiple site visits, where data was collected through onsite observations. By visiting each building in Saidpur, data like demography, heritage buildings’ analysis, Saidpur’s architectural timeline, urban crawl, and pattern of the village was collected, studied, and analysed. The process also involved various interviews and surveys to collect authentic information on Saidpur. This research aims to bring a detailed case study on the account of Saidpur’s urban and architectural heritage and hopes for global recognition and heritage preservation activities for the village.