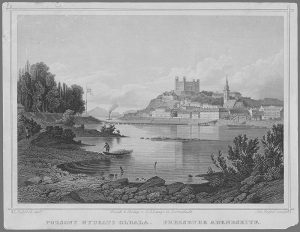 We tend to perceive rivers flowing through cities as the presence of a natural element, although most of these rivers are far from their pristine condition. Similarly, the appearance of the Danube in Bratislava is the result of numerous human interventions that have modified its shape over centuries. Once we admit that the river is a human construct, we can look at the process of its formation as a project that influenced not only the shape of the river but also the city itself. The aim of the ongoing research is to look analytically at those moments of river change that have irreversibly affected the structure of the city and have defined its further development. This paper elaborates on the matter by further focusing on the transformation of the river into a canal.

The reasons for the individual interventions in the natural riverbed differed. The third regulation (1886 – 1896) was almost entirely subject to a single objective – to add the missing part of the canal on the route between the North and Black Seas, which would be fully adapted for the transport of goods by steamer.

In order to understand the motivations of certain actions, it is necessary to adopt the thinking of the environment of nascent capitalism. We cannot look at the river only as a flow of water, but primarily as a flow of goods that was necessary to ensure the prosperity in industry, imports and exports, trade in general. In the 19th century, a new paradigm was introduced in city planning. In the belief in technical innovation, the planning process was undertaken by engineers, which represented the opposite to the long-term effects of natural forces and uncoordinated human activities.

This paper places in confrontation the oeuvre of two engineers, Charles-Joseph Minard and Enea Grazioso Lanfranconi. While the former, a French civil engineer, brought a unique way of visualizing the flow of goods between territories, the latter, a Hungarian hydraulic engineer of Italian origins, is responsible for the third regulation of the Danube in the section between Devín and Hamuliakovo. Although their specialisation had a different focus and during their lives, they were not related to one another, their work illustrates well the idea of ​​river as a flow, so characteristic for back then.

For the purpose of this paper, the original theoretical work of Enea Grazioso Lanfranconi was translated and analysed. The project that Lanfranconi finally presented had a clear goal – to definitively fix the main flow. In the proposal, he planned to achieve the fixation in three steps: 1. stabilization of the banks with stone embankments, 2. blocking of all side arms and 3. caving of several punctures.

Lanfranconi’s arguments finally led to the implementation of the regulation according to his proposal. The fixation of the river corridor was performed through the elevation of the banks and the creation of bank-protecting structures. The stabilizing stone, provided by Lanfranconi’s own quarry near Devín, has remained in major parts of the embankment until present day. The fixation of the mainstream has determined further development of the city of Bratislava in many ways. In this case, the act of the taming of nature has caused a disruption in the city-river relation and only recent projects and visions for the city aim to renew this lost connection.