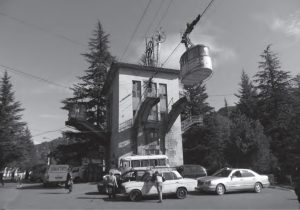 The regeneration of mass housing estates is currently a frequently discussed topic; the attention of architects and urban planners is usually devoted to the exemplary projects from the Netherlands, Germany and France, however, the proportion of housing estates on the total housing stock does not exceed 10% in the countries of the former western block. The prefabricated panel housing in the territories of the former Eastern bloc represent 50% of the entire housing stock and significantly determines the functioning of the city as a whole. The article therefore focuses on the evaluation of the accessibility of the main functional components of the city (work, recreation, amenities) in the context of our living environment and housing units, so called micro-zones, in Eastern Europe.

The introduction part discusses the current state of urban planning and particularly the persistent tendency of functional zoning. The mismatch between the real and administratively defined space is illustrated on the background of Lefebvre’s philosophy about the city and contemporary planning strategies. In order to assess the effectiveness of the residential structures, particularly with regard to functional mix, capacities of the environment are described including various concepts of measuring density and accessibility. The comparison of different situational contexts and accessibilities represents the fundamental chapter of the article. Each case can trace common themes – namely the transformation of mono-functional zone into the multi-functional one, form of (self)organization of residential structures, the question of pedestrian accessibility and reducing the demand for individual car transportation. A certain disparity of understanding the problem of mass housing revitalization leads to reducing the concepts to individual regeneration of prefabricated buildings without a link to deeper system processes. The study summarizes the basic interpretation of the spatial differentiation of housing estate, which are a result of the fundamental socio-economic changes in territory.