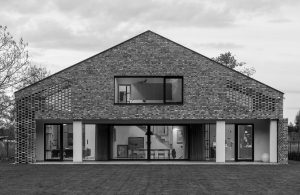 The presented article was originally written as the essay portion of the external Second State Examination on Theory and Methodology of Urban Design at the Faculty of Architecture and Design of Slovak University of Technology in Bratislava. Its content was on the theme of recycling and its influence, or rather its inspiration for architecture. The main aim of the essay was to approach the inspiration of recycling at different levels of understanding, in order to point out that it is not just a matter of reuse of construction waste and material, as it is usually understood, but rather a much broader and appealing architectural problematic. The essay itself is a combination of ideational frameworks reflecting the author’s point of view on the theme, supported by relevant sources and respected authors, and a partial comparison of different theories and their outcomes. The essay was not intended to bring forward new and revolutionary ideas, but instead to intimate the great inspirational potential of recycling and its often underestimated or overlooked significance.

By way of introduction, multiple meanings of the word recycling exist, perceived variously in their relation to architecture. The aim has been to prove that recycling consists not only of the technological process of processing waste material into reusable material in construction, as is commonly held, but comprises a much broader level of meaning. Recycling is inspirational not just through the use of recycled material, but even more through re-processing the architecture – by its own conversion – and through taking over the architectural form and some of its elements; and perhaps above all through taking over and developing some important and inspiring idea and implementing all this into a new architectural concept. It may be claimed that the inspiration in recycling consists of a belief in the importance of preserving values. However, these values are not limited to ecological and economic terms. They are as well aesthetic, cultural and social, and generally ideological and ideational.

As has been mentioned, the most common understanding of recycling is related to material recycling, which however ought not to be perceived just as reusing construction waste in the building process. For architects, it is much more inspirational to recycle/reuse material in order to reflect a deeper ideational intent, the bearing motif of the architectural concept. For instance, having been reconstructed, parts of a historical building are rebuilt from the original material in order to establish a connection with the building’s history.

The second inspiration in architectural recycling is reconstruction and conversion, where we try simultaneously to preserve the identity of the building, its materiality and ideational value, while also looking to whatever the environmental and distinctive motifs are, based on objective or personal requirements. Here all the perceptions of recycling are in focus, and therefore such activity may be considered most inspirational. On the other hand, achieving harmonization of all the mentioned motifs is often believed to be so difficult that not a few architects and developers prefer demolition to any architectural intervention. However, it would be hypocritical to build sustainable architecture, and recycle used materials and waste, while at the same time demolishing buildings into which values ​​and energy have been invested. Thus, we need to deal with recycling comprehensively.

Thirdly, the article brings up recycling of architectural and art elements that, being transferred to what is newly designed, can influence its design or even concept. For instance, original Gothic stained glass windows can be transferred to a modern church and materialize its ideational and conceptual value, as is noted in an example of the Church of Saint Joan of Arc in Rouen, France. Another category is where an ordinary element or object of some other use becomes architecture.

Architecture also finds inspiration in taking over older architectural styles and their forms and elements, as was typical for eclecticism and historizing architectural styles of the Long Century, represented in many European cities. This theme is quite interesting, having fascinated architects and artists in cyclical periods; for instance postmodernism as well as contemporary architecture up to certain point seek formal inspiration. In this case, there is a narrow connection with ideational recycling, where architecture at the end of one of its evolution points looks for answers in older concepts.

Finally, there is the topic of recycling as the central idea of an architectural concept. Citing some inspirational examples embodying such ideas, the article points out how recycling at its highest level not only materializes a belief in architectural quality, but reflects the deepest value of recycling.

Architects, indeed people, whatever they are determined to do, have a duty to give attention to recycling and respect the achievements of their antecedents. Because to create without thinking about what has been created is questionable not just in terms of environmental sustainability, or economy, but more broadly of cultural and social consciousness.