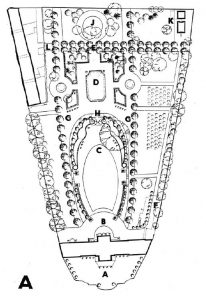 Historical greenery – what do we understand under this term? Historical development of garden architecture in Slovakia is generally accepted until the beginning of the Second World War. The attitude to the historical period between the communist takeover in 1948 and its end in 1989 is embarrassing. It looks like if we were reluctant to accept the fact that this period of our society is also part of our history as are all other societal aspects. In the garden and landscape architecture, as well as in architecture, culture and art, were created works which should be included in our national cultural heritage.
The last quarter of the 20th century is, within gardening and landscaping, characterized by large renewal projects of objects of historical greenery. To assess the value of the historical heritage, their contribution to society and the profession, it is necessary to know and understand the conditions in all spheres of social life, when these renewals were realized. The development of garden art is closely linked to the development of architecture, so it is necessary to monitor it, too.  For understanding of the contemporary approach to protection and restoration of monuments, it is important to recognize the context of social situation in post-war socialist Czechoslovakia.
Furthermore, we must not forget that the personality of the creator is one of the most important factors in the process of creation, his creative beliefs and principles that he follows in his work. In the mentioned period, the work of garden and landscape architect Alfonz Torma strongly resonated. It was not only extensive in number of projects and realizations, but also in the broad scope within the profession. He as an author conceptually led several major renewal and restoration projects of historical green areas in Slovakia. In ZARES, the projection centre of Bratislava municipal enterprise, headed by Torma for 30 years, many high-class landscape architects were concentrated, implementing their projects in the former Czechoslovakia.
On the example of important historical greenery objects in Bratislava, such as Sad Janka Kráľa in Petržalka and Medická záhrada in the Old Town, it is possible to outline a way of approach to restoration of historic greenery in Slovakia in the mentioned period of the second half of the 20th century and to name their major contribution to the development of the garden and landscape architecture.
The last quarter of the 20th century is, in the garden art and creation, characterized by large historical green renewal projects. Factors that are analysed for the final appearance of the restored objects of garden architecture can be summarized as follows:
– The state of the renovated object.
– The context of the period of the object’s origin.
– The context of the period when the renewal of object is done – political, social, cultural, economic situation.
– The contemporary situation and the views of landscape design.
– The development of contemporary architecture and art.
– The contemporary view on monument restoration.
– The personality of the architect / landscape designer.
In the view of the continued existence of parks and gardens, their further use, the fact of who operates the object, as well as the financial and material resources ensuring continuous professional care and maintenance in an adequate range appear to be more important.