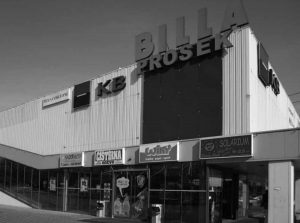 Negative side effects of industrial and transportation development in the 18th and the 19th century caused consecutive separation of work from housing. Initial support of functional segregation in order to create quality living environment later resulted in construction of large prefabricated housing estates. What first seemed to be effective, efficient and according to some experts the only possible solution for shortage of housing in the post-war period, had many undesirable impacts like mono functionality, monotony, low construction quality, etc. While the western European countries, during the 70s, gradually waived this sort of housing out, in former Czechoslovakia it continued until the mid-90s. As a result, apartments in housing estates represent a substantial part in current housing stock. With the fall of Communism in 1989, this housing construction was almost immediately stopped and simultaneously public criticism against it arose – there were even some calls for their demolition. Despite more than 20 years of professional discussions, life in mass housing estates hasn´t changed much. Crucial question what and how to do in order to change the “sleeping” estates into the qualitative urban environment still remains.

Mono functionality together with radical increase of cars cause considerable problems in current city operation. This could be partially solved by completing estates into the planned functional complexity. In these terms high population density together with small built up area, typical for prefabs, create good preconditions for diversity of uses. For the successful mixed use implementation, it is important to consider three different levels of spatial proximity of uses as well as to define its limits and potentials. For the coarse grain mix of uses there is a potential in transformation of mono functional work areas, located close to housing estates, as they can generate new work opportunities. For the support of medium grain, disposable areas of inbuilt facilities, especially in central locations, could be used in order to add currently required functions. For the fine grain mix, that almost didn´t exist in the past, adding facilities and services into the ground floors of housing blocks seems to be a good solution despite many factors that limit their integration.

Success of mixed use development considerably depends on legislative support. In these terms the present developmental planning system seems to fail. It is high time to start a serious professional discussion of how to change the current complicated, obligatory and too general city developmental plan into a simpler and flexible system of detailed developmental plans, prepared in dialogue between the city, developers and inhabitants. Support of tools for implementation of mixed use together with efficient public transportation planning might help to transform the prefabricated housing estates into attractive and pleasant living neighbourhoods.