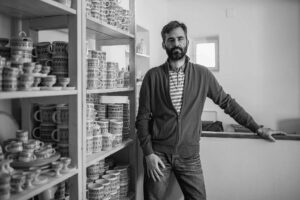 The article deals with the phenomenon of the region’s cultural identity loss and efforts to save it through design. Region is a geographically separated area of the state which has been shaped into its current form by various geological, geopolitical and socio-cultural factors. As a result of these influences, a unique regional culture with a specific tangible and intangible heritage was created. The country thus has a unique cultural identity that defines the character of its material culture. Nowadays, we are witnessing the gradual loss of cultural identity. It is an undesirable but common reality in many regions of Slovakia. The researched Hont and Novohrad regions are no exception. However, Slovakia has a great cultural wealth that deserves recognition and celebration. Considering the geographical location of Slovakia, there could arguably more easily emerge colourful and internally diversified cultural regions. However, the identity of the tangible and intangible cultures of Central Europe is not clear-cut and thus, in many cases the identities are largely polarised. Due to the cultural diversity of the investigated regions, regional awareness is low. Cultural overlaps occur and the society loses a sense of regional identity and belonging. Furthermore, today’s society is advancing too fast across new technologies, generating new habits. The authenticity of the original culture is thus suppressed at the expense of current development. The overall process of extinction is also accelerated by the current way of life, inappropriate approach, absence of creative processes and low initiative from the society’s side. Regional development and its maintenance consist in systematic and creative creation which is often absent. This situation creates space for designers who, through extensive informative research, creative activity and modern technologies, can identify systematic steps oriented to maintaining culture. Therefore, it is necessary to incorporate design into the regionalisation process. Design plays a fundamental role in the creation of new products, services and systems. It is a way of solving problems and finding the best solutions aimed at a wide range of users. Design can positively influence the quality of public space and services, increase innovation in the region and respond to societal expectations. An ideal example of the positive influence of design and creative activity in favour of regional development is the globally recognized association Werkraum Bregenzerwald. It is an association made up of several members representing various trades and crafts. The primary mandate of the association is to support the economic and cultural development of the region. This organisation strives for the sustainable development of crafts and trade through the preservation of and creation of new jobs, local production of sustainable products and their subsequent distribution, the preservation of quality crafts and the creation of intimate relationships through cooperation between craftsmen and designers. Similar foreign projects include The Polish platform Design Silensia and The Sploty na fali project. Ways of maintaining traditions in Slovakia is mainly through the Centre for Folk Art Production (ÚĽUV). In the initial phase of the research, we prioritised creation, production from locally available materials and distribution of regional products in the studied region as well as beyond its borders, for the purpose of economic and cultural development. The partial goal was to design and create a product or a collection of products inspired by the local folk culture. However, this approach turned out to be inappropriate considering the fact that creation of a product is in the hands of a designer, while the participation of the population in the creation process is limited to the form of processing materials and production. This result is the product of an individual who tries to implement design as an element of regional development, regardless of the needs of the local population. Due to the failure of the first research method, the final part of the article is devoted to a new research method which focuses on participatory design. Participatory or cooperative design is a valuable tool in the field of design creation. Its role is to involve local cultural associations, stakeholders, designers, researchers and end users in the design process to ensure that the final product meets all the needs of the consumer. The new research method will focus on laces of Hont and Novohrad that represent a specific cultural heritage of the regions. In order to preserve this tradition, it is necessary to bring it closer to the current generation. However, the tradition must be preserved so that it is recognisable and accepted by the public. Therefore, it is essential to deepen the cooperation with locals and experts in the domain of the local traditional lace, as well as with active participants in courses with the intention of creating regional products. By collaborating in the design process, we can thus support and revive this existing element of folk culture into a contemporary, sustainable form through products with the attributes of local identity that would be acceptable to the local society.