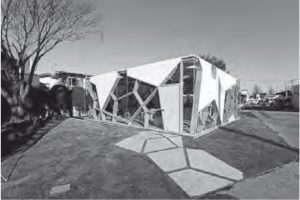 Spatial development of cities increasingly requires a strategy reflecting demands and needs of contemporary society. The worldwide trend of globalization is related with concentration of vast majority of job opportunities into urban agglomerations.  This results in cities´ rapid population growth and in occurrence of suitable conditions for new investments. As part of the mentioned trend: the concentration of production and population in urban agglomerations, the need for fast solutions for public spaces is emerging. This is due to the fact that public spaces have been recently considered as basic skeleton part for transformation of the intra-urban structures. Concentrations of population often create large mono-functional territories that are free of working opportunities or other activities, so there is an urgent need for integration of additional functions for public and semi-public spaces in these territories. Thus, public spaces in the new context of urban development are becoming an important social phenomenon of the city.

The so-called “temporary public spaces” start to be discussed recently. These are spaces offering a diverse range of incentives for the public e.g. city beaches, picnic areas, green parking plots with street furniture, areas for “street performances”- street art, and recently fashionable and often projected pavilions with variable disposition, intended mainly for presentations, education and relaxation. A pavilion, considered to be a bearer of an impulse, identity, information and orientation, has become a favourite element in urban structures. At the same time, it is an object, which can determine human activities taking place in and around it, since it is a part of the public space. Impulses, which a pavilion as a clearly defined space within the urban structure often brings, are associated with social interaction.