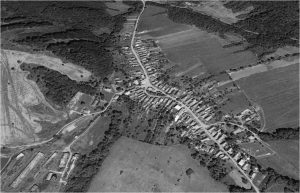 Globalization is changing our world at such a speed that regions are losing their ability to follow up. Updating infrastructure and making it available and cheap for increasingly more people to reach destinations in a short time. This has created massive pressure on labour. Transnational corporations can build manufacturing establishments anywhere in the world and attract labour to these locations which was not possible before fossil fuels were exploited to gain cheap energy. Traditional and historical regions are losing their identities. By copying a pattern, local specifics are disappearing and are being replaced by global uniformity.

This together creates huge pressure on rural areas. People from villages are moving to city suburbs because of work opportunities and people from city centres are leaving them because of increased real estate pricing.
Understanding that, we can follow cultural concepts and transform them to fit the current era and sustain local identity within communities. Compared with evolution, identity as part of social sustainability has the same self-regulated mechanisms. The adaptation process can be achieved in different ways, but only few are truly sustainable.

Conserving architecture and material possessions has not produced sustainable results. The origin and meaning of every material aspect of how our grandparents lived has faded away. Whole structures and details are copied and used as decorations without deeper understanding. Those details, materials and colours cause hormonal reactions in our bodies. We applied different methods and tested them to see if our process is taking the right direction. Sustainability is a process of adaptation through small changes. With this in mind, we seek to maintain local culture and react to tensions of globalism.

Identity as a sense of belonging is deeply inhered in us. From the evolutionary point of view, being part of a group increases your chances to survive.
The sense of belonging does not need to be related to family-based communities. Virtual groups with common tokens such as language and other cultural similarities can also initiate biological mechanisms releasing hormones and produce the feeling of safety. Belonging to a place has a similar effect; it gives an individual the sense of the known and the feeling of prediction. Our hormonal system is prepared. This set leads to wellbeing even if it is invented or imaginary. Culture can also be interpreted as a sum of rules that reinsure survival of the group as a whole. These rules are evolving on the backdrop of environmental and socioeconomic conditions. Only maintaining the current status without deeper understanding and origin preserves no more than the status quo. This condition is not evolving and will disappear over a few generations.

To restore the sense of community and reconnect local people to their village on a deeper level, the participatory approach was tested. The process and tools well known from urban areas were applied in certain Slovak villages. As compared to participation in cities, in the rural environment, the process is more time-consuming. In theory, this should bring a result that lasts longer than that achieved by standard processes.
One of the goals is to prepare and show in rural regions that what they have is a good stimulus for the development of tourism. Local jobs can be created and managed locally without the need to wait for something or somebody.
Methods proposed by us will have several outcomes like networking, open communication and, if successful, can be an inspiration for other villages and activists to adopt this approach. This time-demanding activity can help support local people and show them how to coordinate themselves in the decision-making process. The bottom-up approach increases self-esteem and by placemaking, small public interventions can help with communication with local administration. Communication between local municipalities and people is crucial to achieve democratization of the decision-making processes.

The participatory approach in design is a challenge for the designer alone. They take the role of facilitators and must use their creativity to achieve a satisfactory outcome. By involving local people in the design process, the whole process is not only transparent, but people can recreate their attachment to place and sense of community at a deeper level. Even such trial is time-consuming and demanding on both sides; the result and experience is more sustainable and can create synergy among all participants if it is handled well.

The bottom-up decision-making process leads to the development of the creative potential of citizens, deeper accord, greater feeling of responsibility and mobilization of residents’ own efforts in rural regions. Communication between citizens and local municipality is crucial to succeed in achieving a positive outcome. If one part is missing, the results remain theoretic only. The role of the designer is that of a facilitator.

Short-time thinking, human potential and capability of local people are the main obstacles to sustainable inclusive development. Effective research by participatory design in rural areas can only be conducted in person. Unfortunately, the current pandemic situation does not allow for a proper field research and completion and testing of the hypothesis. Time-consuming sessions, closed local archives (the only source of information about small villages) and intense human relationships have made us unable to continue the research. The research, local contacts network and local activities are still ongoing.