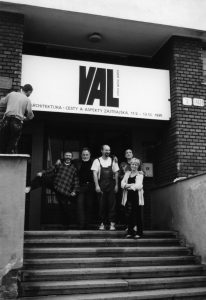 The paper is an introduction to my thesis entitled “Author’s Conceptions in the European Architecture of the 20th Century”. Specifically, the objective of my study is monographic research into the Slovak artistic-architectural group VAL, which was active from the 1970s to the 1990s. The group consists of the artist Alex Mlynárčik and architects Viera Mecková and Ľudovít Kupkovič, who gradually began to develop their visions together. During the years 1968 (1970) – 1994 they produced eight projects illustrating possibilities for our environment of tomorrow.

The 1960s were accompanied by a discussion critically thematizing the main ideas of modernism. Visionary, utopian or dystopian trends, which presented various scenarios for the near future, were an integral part of this discussion. Their subject was the relationship between man and the environment, man and the society, architecture and landscape, or man and the cosmos. These visionaries have generated a whole series of architectural concepts, which even today are an inspiration for thinking about architecture and the environment. VAL was a valuable part of this global movement, and thus an important phenomenon from the point of view of local architectural discourse.

The VAL group is quite ambivalent when looking at individual projects, its theoretical and practical background, and its position in the local and global context. The basic ambivalence concerns the classification of their work. On the one hand, the group’s work extends in many directions, works in many contexts, interprets numerous historical and modern artworks, personalities and responds to many socio-cultural issues. On the other hand, it wants to be a distinctive and free artistic play.

In addition to Pierre Restany, a French art critic, personal friend and biographer of Alex Mlynárčik, VAL is related to the concept of prospective architecture formulated by French critic and art and architecture theorist Michel Ragon in the 1960s. In the paper, I pursue many other views of experts from the local and international scene, who further developed or questioned the affiliation of VAL to prospective architecture. From the point of view of local art history, VAL’s activities are attributable to the unofficial scene (Zuzana Bartošová), neoconstructivism (Viera Kuracinová Janečková), conceptual dematerialized art (Aurel Hrabušický), … From the point of view of the history of architecture, VAL is placed in the context of late modernity (Matúš Dulla, Henrieta Moravčíková). Their work is described as prospective, futuristic, visionary, utopian, radical, experimental, alternative, as another variant – elsewhere.

As early as the 1970s, when the first texts were written, there was a clear discussion of VAL’s role of provoking, namely, to provoke “average” or “chaotic” period’s construction to a better performance. Their projects were claimed to be a direct response to contemporary problems of architecture and urbanism, and last but not least, to lead to “new social perspectives”. These ambitions existed even though they could not be made public. Paradoxically, after 1989, VAL’s genre specificity and uniqueness was recognized as an “experiment” in the context of our architecture, but their affiliation with late-modern architecture was emphasized. It was this affiliation of VAL to late modernity, manifested in monumentality, that served as an argument to free this mode of expression from its direct connection with the political regime and its demands. What many texts meet is precisely the emphasis placed on freedom of creation, which makes their projects a good material for reflection of questions such as the political/apolitical nature of architecture.

Much more attention was paid to the work of VAL from the point of view of art history, where it has steadily established itself as a manifestation of conceptual art. The same body of work which on the one hand is considered a manifestation of monumentalism in architecture, is dematerialized art on the other hand, and non-objective architecture from the point of view of concept. The work of VAL is scientific, philosophical, and poetic. It is an intellectual escape elsewhere, where it formulates its own rules of the game, it is a syncretic variant of post-war modernity. VAL represents this unique relationship between architecture and art, multiplied in our local context by a totalitarian regime, where one medium can express itself more freely in the language of the other, on the basis of mutual escapes.

One of the possible reasons for this complex tangle of meanings and expectations, which to some extent contradict each other, is that the work of VAL is viewed mainly in summary, as a whole. Their work is either termed as a whole, or the whole is represented by its part—through several selected projects. However, VAL has produced eight projects over a period of almost thirty years. In addition, there is a significant disproportion between the time when the projects were created and when they were publicly presented in our country, and subsequently also reflected.