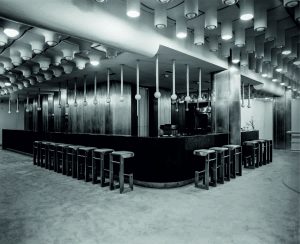 The creation of architecture is generally multi-layered and often complicated not only with respect to relationships (client – space – time – finance …) and the surrounding environment but also the current conditions under which the architecture is created. Every client, every assignment is always unique and original. Unlike the visual arts and product design, all architectural works create three-dimensional interior space. The environment for life and work, which is a synthesis of an artificially created environment and nature, is crucial for people and their lives. The creation of interior space is the main cognitive characteristic of architectural creation. Architecture creates a basic spatial framework for the interior.

Interior design is a complex process that combines the needs of the user with the properties of existing or emerging space. The requisite of this process is the adequacy and appropriateness of the design with regard to the properties of the building. Interior design is a highly specialized field that differs from all other types of design, especially by the fact that in addition to the function, aesthetic qualities and structure of the elements, an interior designer must respond to a specific place. However, this discipline can currently be divided into three separate specializations: interior decorating, interior design and interior architecture.

Interior decorations are the art of interior enhancements, which give it a certain style (in combination with the architecture).

Interior design is an interdisciplinary segment that deals with the creation of interior spaces, expressing a certain specific atmosphere and identity.

Interior architecture is associated with the reconstruction or revitalization of existing buildings, or with emerging architecture.

The interior is always delimited by architectural structure that gives the interior the basic spatial characteristics and determines the size, shape and proportions of the interior. The interior space is directly defined by the peripheral structures of the building or by various internal structures. Just as an artificially created environment has a strong influence on a person’s life and feelings, it has also been proven that it works the other way round as well, which means that human needs and demands are a decisive factor in creating space for a person. Architects create for people and therefore the application of psychology in their work is objectively interwoven with questions of form, construction, economics, sociology, etc.

The project described in the paper is based on fundamental research concerning the beginning, development and trends in Slovak interior creation and design, as well as the beginning and development of Slovak interior school in the 20th century. Thematically, it will present less explored work and designs of the most significant personalities of Slovak architecture from the 20th century to the present. The main aim is to create a digital database and to prepare and publish a full-colour book that presents the most significant, as well as unpublished works of Slovak interior designers.

During the research, several situations were observed repeatedly. They were often peculiar, but also similar because of the fate these works met. The case studies demonstrate the development of interior design of the second half of the 20th century, its current state and the level of care given to these works. Many works of architecture of the second half of the 20th century have lost their fight for survival. Nevertheless, architecture has at least a chance that it might last for centuries. In contrast, the useful life of interiors is calculated in years, in decades at most. Despite this natural characteristic some statements about the interior design in the given period under review have surprisingly been preserved. It seems paradoxical that the inactive force of “carelessness” that allows for great architecture to decline and decay is the same force of passivity that has enabled some works of interior design to survive almost untouched. The research focused on public interiors of both well-known and a bit less-known buildings designed by Slovak architects from various parts of Slovakia. It presents the work and creativity of interior architects, especially from the communist era.

However, interiors are often temporary creations; their existence is relatively short and fleeting. Many past and no-longer-existing interiors should not be forgotten. It is because even in relatively recent times and difficult to understand conditions of current time works of indisputable architectural and artistic qualities have been created. The ambition is to bring these works back to life in various ways.

Research focused on the public interiors of well-known or a bit less known buildings by Slovak architects from various parts of Slovakia. It presents the work and creativity of interior architects. The result, as is the case these days, was often short-lived, so the research offers options for saving some works in the form of preserved photographs, drawings, occasional exhibitions or in the form of virtually recreated interiors.