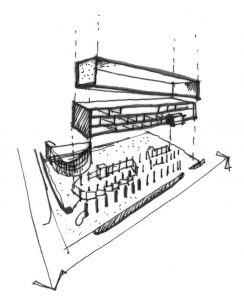 This article introduces an often-overlooked southern African city to the global urbanism and architectural discourse. The focus is thus on the architectural heritage of Pretoria, the administrative capital city of South Africa, and the author further investigates and broadly documents the Pretoria Regionalist style. This contextually inspired interpretation of the Modernist Movement is put under the spotlight and the historical events and circumstances that formed this stylistic mutation are analysed and documented in broad strokes. An abridged timeline of historical events, which places the founding of Pretoria into context after the great exodus (1830 – 1840) of the Afrikaans-Dutch speaking people from the Cape Colony (est. 1652), and documents the original urban planning and development, provides an overview of the architectural influences from Europe and the African landscape, and subsequently introduces the term the Third Vernacular used to describe the locally inspired mutation of the Modernist style in the academic architectural discourse. This paper briefly describes and introduces the terms such as the Zero Vernacular, the First Vernacular, and the Second Vernacular, in respect of the timeline of architectural and urban development in South Africa. Each of these terms is associated with a different historical period – and by extension, a unique architectural style, and narrative characteristics of that specific period – in the history of the country. In addition to its introductory role for a new professional audience that may be unfamiliar with the South African architectural works, this paper also explores the various academic writings that cover the built environs of Pretoria. It is there that the term the Third Vernacular has been defined by Roger C Fisher, and discussed at length in the compendium, Architecture of the Transvaal. The Third Vernacular references and describes in detail the most significant architectural design style that underpinned, and that specifically dominated the Modernist period in Pretoria. In this definition, the influences of the social and cultural, as well as the natural landscape, contribute to the understanding of the phenomenology of this style’s characteristics. Subsequently, the unique identifying built elements that are universal in the architecture are also further documented and illustrated through the study of some iconic built structures. The contextually specific projects that were identified are discussed as examples of the artistic and cultural expressions of the architects that created them. Moreover, it is worth noting that these projects also display a level of master builder craftmanship and understanding of the construction materials – all of which reflect the landscapes of Pretoria.  Another significant area of focus in this article involves the various uses of brickwork and artwork in the creation of architectural sculpture. This regional appropriate style is not only a reflection and interpretation of the surrounding landscape, but it also expresses the lack of materials and industry in the South African Republic, in contrast to Europe where they were more widely available during the same period. Thus, in support of the new technical terminology, eight seminal architectural projects are listed, analysed and described within the context of the Third Vernacular (or the Pretoria Regionalist style). These projects have been selected for their unique interpretation of the Pretoria Regionalist style and represent a significant period in the history of the city and its context. This paper also identifies the architects that were central to the development of the architectural discipline in Pretoria and South Africa. Reference is made to the influence of Le Corbusier on the Transvaal architects, the Congrès Internationaux d’Architecture Moderne (CIAM), and the involvement of the South African architects in the global discourse. Consequently, this paper focuses on the works of Norman Eaton (1902 – 1966), one of the most significant Pretoria architects of the South African Modernist time, whose built works most eloquently exhibit the cultural aspirations of the city. Furthermore, additional reference is also made to the design and theoretical influences from South America, namely Brazil and the Brazilian Modernists, after the Second World War and the cross-Atlantic exchanges that further developed the architectural language of the Pretoria Regionalist style. The chronological timeline of projects discussed and illustrated in this paper analyses the mutation of the various international influences, at both the civic and residential scale. This timeline gives an insight into the growth of the city from its fine-grain urbanism before the Second World War into a modernist capital dominated by tall buildings. Thus, the city and its urban structure and the architectural projects are analysed, and the transformation from a Calvinistic styled communion gathering place into a metropolis of the African continent. It is through these various lenses of culture and Afrikaner society and history that the architecture is introduced and placed into context, within the city, and within its historical framework.