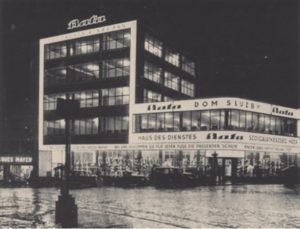 Bratislava in the inter-war period in the 20th century was the centre of the political, social and cultural life in the country. The major architectural trends had a significant application there, along with utilization of progressive technical and construction methods. Among the realized projects a considerable number of structures created for commercial purposes from that period have been preserved. Their modernity was, apart from formal features, based on the application of the latest technologies and materials, emphasising the mutual relationship between the investor, architect and contractor. The interior spaces of shops, cafés and department stores, together with their facades, shop windows, entrance portals and passages, bore an innovative approach and enabled a significant change in the appearance of the urban centre. The transformation of the commercial spaces involved new elements of urbanization, and gradually the poetry of the new aesthetics of glass, light and new materials was implemented in the streets of Bratislava in the 1920s and 1930s.