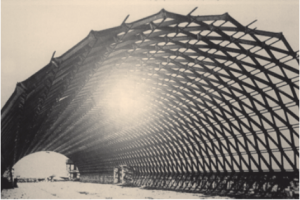 Understanding of industrial structures is based on knowing their historical development and on the analysis of the technical development and development of new technologies of that period, being the main holders of industrialisation. It is probable that this sort of view will result in simplification of some aspects, whereas their clarification is closely related with philosophical, ideological, artistic and historical analysis.

The topic of industrial buildings based on confrontation of industrial buildings of Junkerswerke and the industrial building tendencies of Bauhaus in Dessau was a point of interest of a few authors. Some of them recognised professionals on Bauhaus, others, the enthusiasts, base their knowledge on the history of the Junkers company. Both sights are in their nature very simple and restricted as they did not grasp the core of the topic. In spite of this fact they all can be considered as unique, bringing precious information on cooperation of the two institutions, based on industrialised prefabricated building. Thus, as if the authors wanted to finish the forgotten piece of history of industrial structures. The analysis of the current state of these structures brought, as the first step, a selection of information resources and their division into primary and secondary resources. The primary ones are represented by sight research and search of archive documents, including graphic and text-like groundwork, photos, drawings, architectural, structural and building drawings, patents, company’s professional analyses, notes from meetings, etc. The mentioned materials include particularly important facts on Bauhaus and Junkerswerke cooperation as well as their individual, separate development of industrialised prefabricated steel structures.

Bauhaus as one of the avant-garde movements of the 1920s was profound part of general development of industrialisation, it was its second modern. The cooperation with Junkerswerke in many areas is a direct proof. Inspite the fact that the firs idea of Bauhaus was based on relation between arts and crafts, the turn of events started in times of Weimar when the relation between arts and technology had started. However, it is necessary to state that it was a formal following of technology, its purely aesthetic interpretation, motivated by forms only, and not understanding its essence. However, there is a light point in the period of Bauhaus, the point that confirms the no legitimateness of the above stated statement. It is the era of Hannes Meyer in Dessau. It is the period of deep understanding of industrialisation and prefabrication.

As a result of a split of the profession of a “Baumeister” into the professions of architect and engineer, a split of tasks and functions occurred, breaking the symbiosis of arts and technology. The split was also due to the growing requirements on the organisation of the building program and on the very complex and differentiated building tasks. However, the main outcome for the future should have been the mutual cooperation of the two companies’ technical rationality. Technical rationality and a quality design should again, as it already had been before, find integrity in architecture. It is because architecture cannot exist without the structural system. There is no built work without space; there is no space without a plan, no plan without a structure and finally, no construction without a form. A structure is an important part of a design project. The sequence is as follows: design, structure, calculation. The static calculation is only a necessary proof to the correctness of the structural solution.

The above mentioned statement and confirmation of the thesis on inevitable cooperation of an engineer and an architect shifts us to a different dimension that is to say to a field of expression of architecture. What is true architecture and what is only affectedness? This is, how a German theorist and historian in architecture and arts, Otl Aicher answers this question: A true architecture is building without citations, without such citations like the Paladio’s, Mackintosh´s, Le Corbusier’s”. Thanks God, there exist buildings without any citations. Industrial buildings belong to them, although there are some with Manneristic tendencies and promotion of form and expression above the structure itself. The true architecture wants the only thing: be clear, to show only what exists and not to show what should be. It is a right opposite to transcendental aesthetics, aesthetics without sense and purpose, the one where task of function, value, production and economy is not important anymore. To this transcendental aesthetics belong columns that do not carry the load and still look like Greek columns, a portal that is so large that it must be cut to provide passage etc. However, it is sad, that right this aesthetics is a true version of the today’s official architecture.